Indian selectors brought in a fit Akshar Patel in India‘s squad for the remaining two Australia ODIs, dropping Ravindra Jadeja. BCCI announced India’s squad on Sunday with only one change in place. Akshar, who had twisted his ankle before the first ODI at Chennai, has now been declared fit and will join India as the team goes to Bangalore and then Ranchi. India have already won the series 3-0 with comfortable victories in Chennai, Kolkata and Indore. India will also play three T20Is in the tour before they face a visiting New Zealand side for yet another limited-overs series. READ: Mohammed Shami in, Ravichandran Ashwin, Ravindra Jadeja out for first 3 ODIs

This move by India proves they are confident and want to strengthen their bench. Also, India head coach Ravi Shastri insisted on saving the experienced ones Jadeja and Ravichandran Ashwin for Tests and this decision is a reflection of that. You have a heck of a lot of cricket being played. You have about 25 Test matches being played in the next two years and a similar amount of One-Day games and T20I games. If you look at No.1 and 2 bowlers in the world it is Ashwin and Jadeja. If you start playing them across all formats, there will be a burnout. The World Cup is still two years away there s enough time to get back, Shastri had earlier told during an interview to India Today.

You have to preserve them for what you are looking for. The emphasis should be on Test match cricket as far as they are concerned. They can play across all three formats. How much you want to use a player is a decision that has to be taken by the team management. 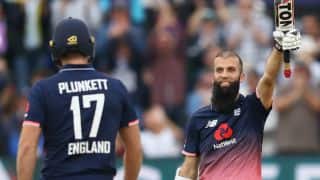