The live cricket streaming of the India vs Australia, CC Women s World Cup 2017 semi-final will be available on Hotstar.

After battling their way into the knockout stage of the tournament India take on the defeding champions Australia in the second semi-final of the ICC Women’s World Cup 2017 at the County Ground in Derby on Thursday. The live cricket streaming of the match will be available on Hotstar, along with the live telecast on Star Sports 1 and Star Sports 1HD. In UK, the streaming will be available on Sky Go, along with the live telecast on Sky Sports. India faced the Australians in the gorup stage of the tournament, where they suffered a deaft, as they would be aiming to avenge the defeat, while Australia would belooking to come up with similar winning performance and make it to the final. India vs Australia, WWC 2017: One hit closer to the Lord s glory

India have won all their matches at Derby this summer. The two defeats, against South Africa and Australia, had come at Leicester and Bristol respectively. How the players play the situation is important because having said that Derby is our home ground, you need to perform on that day to win. We ve played a lot of the group stage here, four games, so we are aware of the conditions and that is our advantage, said Mithali ahead of the semi-final. ICC Women s World Cup 2017: Mithali Raj s Tip of the Day

India replaced Ekta Bisht with Rajeshwari Gayakwad in a virtual quarter-final against New Zealand. She finished with match-winning figures of 5 for 15. There is no way India will field a different playing XI, unless there is a last-minute injury. As is the case with Australia. The fit-again Meg will replace the stand-in captain Rachael Haynes. 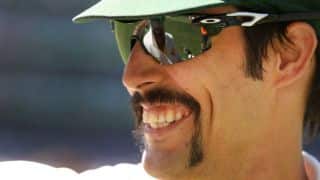 Mitchell Johnson: England have serious issues to deal with before Ashes