The pair are the only fresh faces in a 14-man squad that includes six specialist batsmen and five pace bowlers.

The uncapped pair of Victorian pair of top-order batsman Marcus Harris and fast bowler Chris Tremain have been included in Australia s Test squad for the first two matches against India next month. The pair are the only fresh faces in a 14-man squad that includes six specialist batsmen, one of whom is the recalled Victorian batsman Peter Handscomb, and five pace bowlers.

From the Test squad that went to the UAE to play Pakistan, those to be dropped are Matt Renshaw, Marnus Labuschagne, Michael Neser, Jon Holland and Brendan Doggett.

After four rounds of the ongoing 2018-19 Sheffield Shield, Harris is the second-highest run-getter with 437 at 87.40 which includes two sixties and an unbeaten 250 against New South Wales, while Tremain is the second leading wicket-taker with 24 at 20.45.

Harris, 26, looks set to make his Test debut as opener at Adelaide Oval on December 6 as partner to Usman Khawaja who has been included in the squad. Tremain, 27, is capable of bowling extreme pace and has played seven ODIs for Australia. In first-class cricket, he has 200 wickets an 23.31 apiece. Tremain has three five-wicket hauls for Victoria this Sheffield season.

Hanscomb, 27, has been given a chance to add to his 13 Test caps since the ill-fated tour of South Africa in April where he was 12th man for the Newlands Test where the ball-tampering scandal broke. Since the Sheffield Shield got underway, Handscomb has made 27, 48, 123, 2, 4 and 23.

The former Australia batsman Dean Jones told CricketCountry last week that Harris would be picked by Australia for his phenomenal run-scoring over the past few seasons and urged the selectors to bring back Handscomb for his abilities to play spin.

Khawaja will captain Queensland in their Shield game versus Victoria next week as he returns to competitive cricket after undergoing knee surgery last month. Shaun Marsh has been retained after scoring 362 from just two Shield matches, which includes scores of 80, 98 and 163*.

The pivotal Australia quartet of pace bowlers Mitchell Starc, Josh Hazlewood and Pat Cummins and record-breaking offspinner Nathan Lyon have been named, to go with Peter Siddle and Tremain as the other bowlers. 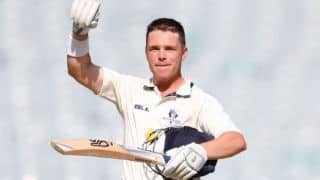