The youngsters on the fringes will line up for another ICC T20 World Cup audition while a few seniors will try to get back into the groove when firm-favourite India take on Bangladesh.

The youngsters on the fringes will line up for another ICC T20 World Cup audition while a few seniors will try to get back into the groove when firm-favourite India take on Bangladesh in the smog-hit series-opener in Delhi on Sunday.

Questions have been raised over the rationale behind hosting the match in Delhi at a time when the national capital is battling post-Diwali air pollution but the BCCI ruled out shifting the tie at the last minute due to logistic issues. Bangladesh are not complaining but pollution, the resultant health concerns and the ban imposed on Bangladesh’s iconic all-rounder Shakib Al Hasan just before the tour has definitely hogged more limelight in the build-up to the three-match series.

The teams are ready to battle it out and with no established name figuring in India’s bowling department, it will be an opportunity for Mumbai all-rounder Shivam Dube, his state-mate Shardul Thakur and Rajasthan’s Deepak Chahar to show what they bring to the table. There are still around 20 matches that India will play before next year’s World T20 in Australia but the Indian team management has said that it would prefer to identify the core of the team without much tinkering.

Considering the same, it is time for these youngsters, including spin all-rounder Washington Sundar, to make a case for themselves. Stand-in captain Rohit Sharma is in perilous form and he would look to carry his Test form into the shortest format. But his opening partner Shikhar Dhawan is yet to find that big knock after making a comeback to white-ball cricket from a thumb injury that had cut short his 50-over World Cup in England.

The Delhi left-hander had scores of 36 and 40 during the South Africa series and struggled to find runs during the recently-concluded Vijay Hazare Trophy, where he managed just one half-century in seven matches. Among others, KL Rahul, Shreyas Iyer, Krunal Pandya and local boy Rishabh Pant look certainty in the middle order. If Shivam Dube is handed his much-awaited India debut, he will have to be placed up in the batting order, considering his big-hitting ability.

Dube’s selection in the playing XI will rule out both Manish Pandey and Sanju Samson because the remaining slots are likely to be taken by Yuzvendra Chahal, Khaleel Ahmed, Deepak Chahar and Washington Sundar.

Like Dhawan, it’s also an opportunity for legspinner Chahal to earn back his place in the Indian side. Getting limited opportunities this year has put brakes on his career which at one time soared in company of Kuldeep Yadav. With Chahal likely to be preferred for usually low-slow Kotla surface, an off-spinner in Washington Sundar will be a more useful option than fielding leg spinner Rahul Chahar. The team may not field two wrist spinners and Sundar’s superior batting ability gives him an edge.

For India, it’s also a chance to work out a strategy to do well when it bats first. The team management has identified this as an issue since if the top order fails, the middle order does not inspire much confidence.

Bangladesh have emerged as a potent Asian cricketing force, replacing struggling Sri Lanka in that position, but the neighbouring side has not been in the best of form, of late. Afghanistan trumped them for a historic Test win in Chittagong in September, though Bangladesh did a decent job in the following T20 tri-series, winning three of the four matches they played but not before losing a T20 to the Asian minnows.

Bangladesh would still present a good challenge, especially with their strong batting line up which is led by skipper Mahmudullah Riyad. But they will definitely miss charismatic skipper Shakib, who has been banned by the ICC for failing to report corrupt approaches. In his absence, the onus will also be on Liton Das, Mushfiqur Rahim and Soumya Sarkar to deliver the goods. 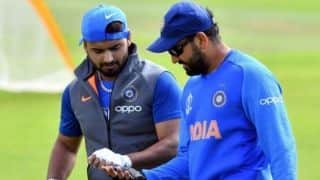