Stand-in captain Rohit Sharma was hit on the abdomen while batting in the nets on Friday giving India an injury scare.

Stand-in India captain Rohit Sharma has been cleared to play in the series opening first T20I against Bangladesh on Sunday after being hit on the left side of his abdomen during a nets session on Friday. Rohit, who will lead the side in place of rested Virat Kohli, copped the blow early into India’s practice session while receiving throwdowns. He left the session immediately, visibly unhappy with the the pace of the throwdown delivery that hit him.

“Rohit Sharma was hit in the left side of his abdomen while batting in the nets today. The BCCI medical team has confirmed that he is fit and available for the first T20I after assessment of his injury,” BCCI said in a statement on Friday.

Sri Lankan Nuwan Seneviratne is India’s throwdown specialist who has been roped in to counter left-arm pacers.

Meanwhile, BCCI president Sourav Ganguly met with Rohit who checked on the team’s well-being in light of the severe air pollution in Delhi. Several members of Bangladesh touring party including their bowling Daniel Vettori wore anti-pollution masks during their practice session at Delhi’s Arun Jaitely Stadium.

Rohit, though, has assured Ganguly that the players are fully fit and they haven’t faced any issue so far. “The BCCI president called the team to check on its well being. Sourav Ganguly had a discussion with stand-in skipper Rohit Sharma on how the team is coping up with the situation. Indian captain has confirmed that the team was fine and had a full outdoor training session without any issue,” a BCCI source was quoted as saying by the PTI. 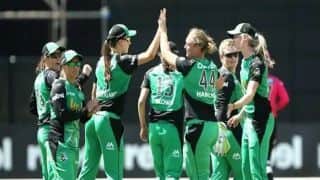 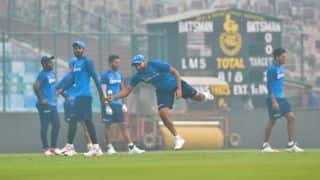