Kohli hit top gear after his hundred, smashing Bangladeshi pacer Abu Jayed for four successive boundaries to remain unbeaten at 130 from 179 balls at the break.

Skipper Virat Kohli became the country’s first centurion in Day-Night Test as India reached 289 for four at lunch on day two against Bangladesh at the Eden Gardens on Saturday. Resuming at 59, skipper Kohli looked at his sublime best as he brought up his 27th Test century to keep India on track for an early finish. India added 115 runs in the first session, extending their lead to 183.

While Kohli pushed Taijul Islam for a double in the square leg region to bring up his hundred, his deputy Ajinkya Rahane (51) too looked in good touch, striking his fourth successive half-century. Rahane was done in by some extra bounce as he top-edged a Taijul delivery to be holed out at point.

But Kohli, who had become the first Indian skipper to go past the 5000-run mark in the longest format, grew from strength to strength en route to his 70th International hundred.

Kohli hit top gear after his hundred, smashing Bangladeshi pacer Abu Jayed for four successive boundaries to remain unbeaten at 130 from 179 balls at the break.

Lunch on Day 2 of the #PinkBallTest

A fine century for @imVkohli and a solid partnership between Kohli & Jadeja as #TeamIndia lead by 183 runs with 6 wickets remaining in the innings.@Paytm | #INDvBAN pic.twitter.com/8FfoKawQiH

With this century, Kohli equalled Ricky Ponting’s record of most hundreds — 41 — as captain in International cricket (Tests/ODI/T20I). The India skipper took exactly half the innings (188) than the Aussie great for the world record.

Kohli had come to the crease under lights with India in a tricky 43/2 inside 13 overs on a day Indian openers had a rare failure.

But the skipper soaked the pressure under lights and batted with both caution and authority for his back-to-back Test hundred at Eden Gardens as India stepped closer to their 12th successive home series win.

Bangladesh’s ground fielding looked appalling while their bowlers absolutely did not show any fight in a damp squib to the pre-match hype for the first Pink-Ball Test in India.

Earlier, the reigning and former world champion duo of Magnus Carlsen and Viswanathan Anand made the opening move by ringing the customary Eden Bell before the start of the second day. 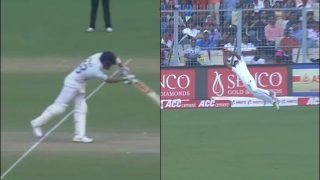 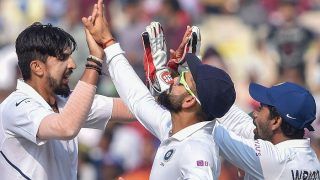