Bangladesh needing 11 runs from 6 balls, Dhoni entrusted Hardik Pandya to bowl the final over was not left disappointed with India winning the match up one-run.

India team survived a close scare as they defeated Bangladesh in Match.No 25 of the ongoing ICC World T20 at Bangalore by just one-run. It was the final over heroics of Hardik Pandya and MS Dhoni, combined with two well judged catches by Shikhar Dhawan and Ravindra Jadeja, that got India to victory. Bangladesh needing 11 runs from 6 balls, Dhoni entrusted Hardik Pandya to bowl the final over was not left disappointed. Pandya gave away 9 runs in the final over much to the joy of the players and fan present in the stadium. You can watch India vs Bangladesh final over here. LIVE CRICKET BLOG: India vs Bangladesh, T2o World Cup 2016, Match 25 at Bengaluru

The dangerous Mahmudullah got one off Pandya’s first delivery and Mushfiqur Rahim smacked the next through covers for a boundary bring the equation down to 6 from four balls. To everyone’s horror Rahim then played half scoop off the next ball on the pads which was just out of Dhoni’s reach as equation became 2 off 3 balls. Off the next ball, Rahim mistimed a pull shot to get out as it became 2 off 2 balls. With Mahmudullah on strike, he mistimed a pull off another full toss which was pouched brilliantly by India’s beat fielder Jadeja. With 1 needed for tie and 2 to win, it was the inspirational Dhoni, who brought smiles with his daredevilry and innovative thinking.

It was a wide short ball outside off, he looked to slash it, and missed completely, with Dhoni collecting the ball and rushed towards the stumps to dislodge the bails as the batsmen attempted a bye, replays showed that Mustafizur was out of his ground. 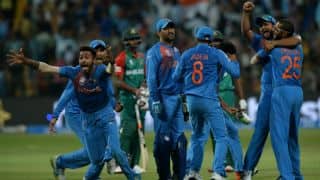