India will begin their tour to Australia with a warm-up game at Glenelg, Adelaide.

India begin their sojourn Down Under with a practice game against Cricket Australia XI in Adelaide on Monday. This game is a two-day affair and would be played at Glenelg. While one may not read too much into this game, it is important for the tourists to get a few spots in order ahead of the first Test. The second practice game would be held in Adelaide on November 28.

With these games being two-day matches, a team may only have an innings each for its batting and bowling. Thus, it is important to allow most players a hit so that they get some game time ahead of the first Test. Virat Kohli will captain the Indian team, as MS Dhoni isn’t available until after the first Test. This game would also allow him to settle into the role of leading a side in a longer version of the game.

Firstly, India have to play the three openers in the side. Shikhar Dhawan and Murali Vijay, the frontline openers, should be favourites to commence the innings in this game. The tyro, KL Rahul, can come in at No 3. Earlier this year, Rahul had toured with the India A side, but played games on good batting surfaces. If this wicket has something for the seam bowlers, the trio may be tested. However, it would be a good initiation on this tour.

Cheteshwar Pujara and Kohli need game time as they are crucial cogs in this batting line-up. Both endured horror-runs in England and this is an opportunity to bounce back in overseas conditions. Ajinkya Rahane is another batsman in the middle looking to build on his form. The interesting thing is that India are trying to find that spot in the middle order. Rohit Sharma, Suresh Raina and Naman Ojha are vying for the spot in the middle and this is a crucial test for them. Wriddhiman Saha is certain to don the gloves, with Ojha filling in if required.

As far as the bowling goes, all seem ready to go. Umesh Yadav would be crucial on this tour as the wickets would aid his kind. Varun Aaron too could have a say and if fit, he should bowl at full throttle in these games. Mohammed Shami and Ishant Sharma will also have an important outing. Through this, it would be interesting to see what role Bhuvneshwar Kumar plays. While he was brilliant in England, his slow-medium swing bowling may not be very effective on the fast surfaces in Australia.

Karn Sharma, Ravindra Jadeja and Ravichandran Ashwin are the spinners in the side. Ashwin does not have a very good overseas record and this is his chance to improve on those numbers. Jadeja hasn’t established himself as the all-rounder at No 7 and faces a stern test from Karn. The man who shows more guile with the ball may have a better chance going ahead on this tour.

Looking at the opposition, one would say that India may not be tested a lot. Young Ashton Turner leads a side that features some promising players such as Matthew Short and Alex Gregory. There aren’t any big names in this team. Which is why, this game is more a tryout for India than any serious indicator of the times ahead. 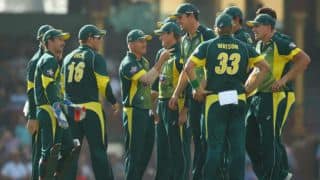 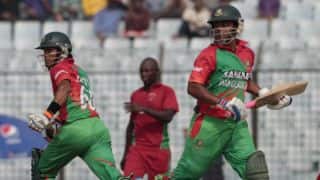