England were 285 for nine after winning the toss at stumps on the first day of the first Test against India at Edgbaston on Wednesday.

At 216 for three, with just over two hours of play remaining on day one of the 1st Test against India at Edgbaston on Wednesday, England had the opportunity to drive home the advantage and take the honours on the opening day of the series. Joe Root had compiled his 12th fifty plus score against India in as many Tests while Jonny Bairstow was soon catching up to his skipper.

However, a mini collapse saw England slump to 224 for six. Root, Bairstow and Jos Buttler were back in the hut in a matter just five overs and India suddenly found themselves ahead in the opening day. And the visitors didn t let up. They chipped away and were rewarded with three more wickets in the session, taking the tally to six overall in the final session, restricting England to 285 for nine at close of play.

That England managed to get close to 300 was owed partly to some late order resistance, but star of the day proved to be India s lone spinner in the playing XI – Ravichandran Ashwin, who finished the day with figures of 25-7-60-4.

Ashwin started off well with a peach of delivery to get rid of Alastair Cook in the ninth over of the day and then came back in the third session to add the scalps of Jos Buttler (0), Ben Stokes (21) and Stuart Broad (1).

For England, whenever they threatened to take the game away from India, they lost a wicket. After the early departure of Cook, Root and opener Keaton Jennings had seen through the first session with ease but early in the post-lunch session, Mohammad Shami s double-wicket burst pegged them back.

Root though continued to motor along and in company of Jonny Bairstow put on 104 runs for the fourth wicket, but at the risk of taking a double, Root fell short of the crease from a direct hit from rival captain Virat Kohli. Kohli s brilliance in the field proved to be the defining moment of the day as a rejuvenated India reined things in with regular strikes.

Ishant Sharma, who was largely ineffective in the first two sessions, got his tail up the in the final adding the scalp of Adil Rashid before Umesh Yadav made up for his early follies of straying in line with the wicket of Bairstow (70).

Earlier in the day, Ashwin made a telling statement, after India were asked to bowl first, in his second over when he tossed one on middle stump which had Cook pushing forward, but the offbreak just turned enough to go past Cook s bat to rattle the stumps.

Cook departed for 13 before fellow opener Jennings and Root played out the first session without much trouble thereon, taking England s total to 83/1 at lunch.

In the second, Shami started the session on a positive note with the wickets of Jennings and Dawid Malan both scalps having a heavy dose of luck inside the first hour of play post-lunch. Shami bowled a back of length delivery and got to nip it back in and Jennings failed to cover the line and the inside edge dropped at his feet and rolled towards the stumps to dislodge the bails. Jennings made 42 off 98 deliveries.

Three overs later, Shami going round the wicket to Malan beat the batsman for pace and it was the same sharp movement that trapped Malan in front. After that Bairstow and Root shut out the Indian attack. The bowlers did well to keep a check on the run-rate but couldn t sustain the pressure from both ends and the England score board ticked ever so gently.

Root became the fastest to 6000 runs in terms of time reaching the milestone in five years and 231 days of his Test career. In the final session, Bairstow and Root looked comfortable until they decided to take on Kohli with a second run, but the Indian skipper picked up and threw – almost instantaneously – from midwicket and the direct hit had Root struggling.

Root went back for 80 and two overs later, a rattled Baristow played one on to his stumps departing for 70. In the next over, Ashwin trapped Buttler in front for 0. Soon after, Stokes gifted his wicket away when he went back to a back of length delivery, but the extra bounce meant Stokes couldn’t work it on the onside and looped the ball back to the bowler.

Sam Curran hung around till the end scoring an unbeaten 24 off 63 deliveries but lost Rashid and Broad and had James Anderson for company at close of play. 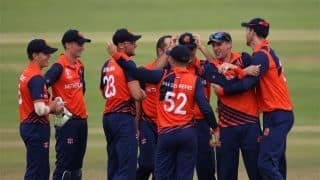