Years of toil and all the knockings in the backyard paid dividends for father Ismail as Haseeb Hameed became the third youngest batsman from England to score a Test fifty.

Years of toil and all the knocking in the backyard paid dividends for father Ismail as Haseeb Hameed became the third youngest batsman from England to score a Test fifty. The advantage shifted to England at the end of Day Four’s play as they find themselves comfortably placed at 114 for no loss. Debutant Hameed stroked to his maiden fifty on his Test debut as England now lead by 163. The Hameed family who originally migrated from Gujarat were at Rajkot witnessing this feat. The fact that the maiden fifty came in Gujarat soil was surreal. Hamid and English skipper Alastair Cook remained unbeaten on 62 and 46 respectively. Live Cricket Scorecard: India vs England 1st Test at Rajkot

For a 19-year-old, playing his first Test, Hameed showed wonderful application and technique. Hameed, who is nicknamed ‘Bolton Blocker’ and ‘Baby Boycott’, for his solid defence carries a tag of being a batsman who scores at a slow rate. However, he ensured that he kept the scoreboard moving as well. England had raced to 40 after 10 over, and dropped the anchor towards the day end. With turn and bounce on offer, Ravichandran Ashwin, and Ravindra Jadeja created the odd chances. In the 15th over, a thick edge from Cook off Ashwin, just fell short of Ajinkya Rahane at first slip. England batsmen lived dangerously at the start but found solace once they got their eye in.

A bit of English comfort was provided by Indian captain Virat Kohli as well. He brought in leg-spinner Amit Mishra after 26 overs. The move was baffling considering a right-hander was in the crease and earlier in the day, England’s leg-spinner Adil Rashid got purchase off the surface to claim a four-for. Mishra got something out from the surface, especially the last ball that he bowled in the day pitched outside leg and took a serious turn, missing Hameed’s outside edge.

India also lost a review when they unsuccessfully challenged a decision as Ashwin felt he had Hameed’s wicket. The ball turned in sharply and Hameed did not offer a shot as he padded the ball. It would have still gone on to miss the off-stump. It came as a surprise that India went ahead with review. Perhaps this bit shows their desperation part.

While Cook was solid in a ‘trademark Cook’ style, Hameed’s batting had the flair. He was rock-solid and dispatched the loose deliveries with equal grace. He struck five attractive boundaries and one six to his family and English fans’ glee.

Haseeb, who was no very comfortable against Ashwin’s wrong ones in the first innings, read them well this time. The England openers made the Indian bowlers toil hard, helping the side gain a commanding position. Yes, England are in a position to dictate terms now. Not often a visiting side find themselves in such a position in Indian conditions. In fact, the last team to dominate India like this in a Test at home was England in 2012-13. Cook, who then was new to captaincy, led the side to a 2-1 win.

The Rajkot pitch did not crumble as much as it was expected to. There was turn and bounce. There was little movement off the surface and no apparent reverse swing. The bowlers continued to be the victim as another day went in the name of batsmen.

Earlier, Ashwin showed why he is the No.1 rated all-rounder in Test cricket. The first innings show with the ball was dismal by his standards. With the side in trouble, the need of the hour was vital contribution from the middle-order. Ashwin’s 11th Test score in excess of fifty denied England a big lead. He was well supported by Wriddhiman Saha, who added 64 for the seventh wicket with Ashwin.

Saha, who had blended caution with aggression en route to 35 and also countered a nasty blow on the helmet, threw it away on 35 when he tried to cut Moeen Ali but only managed to guide it to Jonny Bairstow’s gloves.

A lot was expected from Rahane and Kohli, two of India’s finest and the men who had an exceptional run in the Indore Test against New Zealand. Both fell in the first hour of the day’s play. Rahane misread a length from Zafar Ansari. It was not short enough but Rahane looked to play a half-pull, only to get cleaned up.

Kohli was a bit unfortunate. He had held the fort well till 40 but the extra bounce from Rashid made him go further deep in the crease as he pulled the ball to the midwicket region to Jonny Bairstow’s glee. Glee? Why? He had stopped that the Indian captain had stepped on the wicket while swiveling. Kohli’s was the 22nd instance by an Indian to get out hit-wicket, the second Indian captain after Lala Amarnath and first Indian since VVS Laxman in 2002.

The Indian innings today was all about Ashwin. As leg-spinner Adil Rashid dug inroads in the Indian line-up, Ashwin shepherded the lower middle-order and the tail well to ensure the English lead was only 49. He kept the scoreboard ticking with some glorious boundaries and intelligent batting, and kept Bairstow busy behind the stumps. However, more will be expected from Ashwin with the ball. It is not often we see Ashwin go wicketless despite bowling long spells. When that happens you know that trouble is looming over India. That is the case in this Test.

With a lead of 163, England are at an advantageous position but they will think well before declaration on the final day. They will look to shut India out of the Test by piling a sizeable lead as Kohli raises his game while chasing and this Team India under the new captain are known to play for wins. 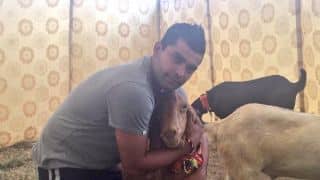 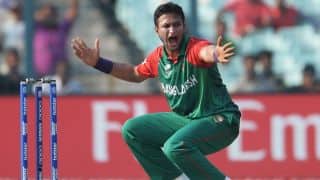