India vs England, 1st Test: Who is Jamie Porter, the bolter in England’s Test squad?

India vs England, 1st Test: Who is Jamie Porter, the bolter in England’s Test squad?

The 25-year-old was County Championship Player of the Year (2017) as Essex won the title for the first time since 1992, finishing the season as the leading wicket-taker with 75.

Ed Smith, the ECB s national selector, today unveiled a 13-member England squad for the first Test against India starting August 1 and it included one name that had never been inked with any international side Jamie Porter.

With pacers Mark Wood and Chris Woakes recovering from injuries, the England selectors were forced to look at young talent to support the veteran pair of James Anderson and Stuart Broad and the allrounder Ben Stokes. In the build-up to Thursday s squad selection, Porter was one of a few names doing the rounds along with the Surrey left-arm pacer Sam Curran, who made his Test debut against Pakistan in June, the uncapped Somerset quick Jamie Overton and Porter, who has impressed for Essex and England Lions over the past few seasons.

So what propelled Porter into the Test squad alongside Curran?

The 25-year-old was County Championship Player of the Year (2017) as Essex won the title for the first time since 1992, finishing the season as the leading wicket-taker with 75 victims at an average of 16.82. This season, he has so far taken 28 wickets in seven four-day matches for Essex and this month he also impressed for England Lions versus India A with three wickets in a four-day match.

“Jamie Porter has been the outstanding seam bowler in the County Championship over the past three seasons. He also impressed for the Lions versus India A last week. With his resilience and appetite for wicket-taking, Jamie fully deserves his elevation to the England Test squad, Smith said of the pacer s Test selection to face the No 1 team in Test cricket.

Overall, Porter has claimed 240 wickets in 61 first-class matches at an impressive average of 24.05, with best figures of 7/55.

Earlier this year, during an interview with Sky Sports, when asked about his chances of playing for England, Porter had said that he did not need to rely on raw pace to impress at the highest level.

“I know the hype is pace and I am not at the top of that bracket but I think I deliver my own type of x-factor and hopefully I will prove that again this summer,” he had stated confidently, following time off during the winter owing to a stress fracture of the back. “I take wickets – I don’t do it at 90mph but I do it at low-to-mid eighties and Broad and Anderson have shown that is quick enough if you move the ball a bit, as I do. It’s important to have a balanced attack, so if you have got a good 90mph bowler you want him in there, but ultimately you need new-ball bowlers who are going to hit the seam and find the right areas.

It remains to be seen if Porter gets a look-in next week as England play their 1,000th Test match, but with four more to follow ahead of winter tours to Sri Lanka and the Caribbean, the optimistic young fast bowler has reason to be confident. 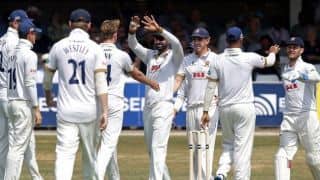