The Board of Control for Cricket in India said the injured duo were ruled out for the team's final Test in the southern city of Chennai.

Indian fast bowler Mohammed Shami and wicketkeeper Wriddhiman Saha will remain out of action for India’s fifth and final Test against England, the national cricket board said Sunday. The Board of Control for Cricket in India said the injured duo were ruled out for the team’s final Test in the southern city of Chennai starting Friday. The two players are already missing the ongoing Mumbai Test. Shami, 26, played the first three Tests of the series but was ruled out of the fourth due to a sore knee and has been advised to rest. “He will be going to the National Cricket Academy (NCA), Bengaluru to start his recovery programme,” the BCCI said in a statement.

Saha suffered a thigh strain in the second Test and is undergoing rehab at the NCA. Wicketkeeper Parthiv Patel has replaced Saha since the third Test in Mohali, where he impressed with both bat and keeping gloves after eight years in the wilderness. Indian selectors are yet to announce paceman Shami’s replacement for the fifth Chennai Test. India are leading 2-0 in the five-match series. Earlier, during the pre-match press conference, Indian coach Anil Kumble stated, Workload is something that we monitor, especially Shami, because he came back after 18 months after being away from the game. It is not easy for any cricketer so that is something we are constantly monitoring.”

“It is quite a challenge when you only have a three-to-four day gap between Test matches. And this series has gone till the last day so it is important that these guys are given enough breaks,” Kumble added. 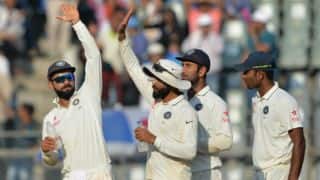