Bairstow and Woakes played out a probing spell from Shami, Ishant Sharma and Hardik Pandya, combining for 99 runs in 23.5 overs to extend England s lead to 123. At tea, England are 230 for the loss five wickets.

Jonny Bairstow (62*)and Chris Woakes (55*) bided their time in the middle in the second session after India once again started on a positive note. Mohammed Shami had removed Jos Buttler inside the first hour of play post-lunch to keep India in the game, however, Bairstow and Woakes played out a probing spell from Shami, Ishant Sharma and Hardik Pandya, combining for 99 runs in 23.5 overs to extend England s lead to 123. At tea, England are 230 for the loss five wickets.

Starting the session at 89 for four, England soon went past India s first innings tally of 107, when Buttler drove one to the onside off Shami, but the Indian pacer came back well when he bowled one full and straight and Buttler shuffled across too much, missing the ball completely and was given out lbw for 24.

Buttler scored at a fair clip – strike-rate of 109.99 – and so did Bairstow and that could prove to be decisive in the larger scheme of things. Shami bowled beautifully, getting the ball to shape back in well, while Hardik Pandya was good in patches.

While England s four-pronged pace attack ran roughshot over India on Day 2, the visitors probably missed the services of another pacer in Umesh Yadav who could have exploited the conditions.

Umesh s replacement, Kuldeep Yadav was quite average, bowling too short and with not much venom. In the first session, Kuldeep s four overs were negotiated easily by Joe Root and Ollie Pope, while in the second, the wrist spinner was employed for just two overs, giving away 13 runs. He didn t trouble either Woakes or Bairstow.

India s lead spinner Ravichandran Ashwin was brought in late – 39th over of the innings – and even though the Lord s track showed signs of uneven bounce when the pacers bowled, the off spinner failed to extract much from the track.

That meant Bairstow could wait for the loose deliveries to score while Woakes was more than happy to rotate the strike and give most of the strike to his senior pro.

The England wicketkeeper-batsman continued his good form, scoring his eighth Test fifty and his second of the series when he got on top of a full delivery from Kuldeep, dispatching it to the cover boundary. Woakes got to his fifth Test fifty off 71 deliveries.

Earlier in the day, Shami and Ishant had removed England openers – Keaton Jennings and Alastair Cook – inside the first nine overs before Root and Pope made the most of the bright and sunny conditions. They got starts, but departed before building on it.

Kuldeep was introduced as early as the 13th over but both Pope and Root swept well against the wrist spinner taking England past the 50-run mark. The duo combined for 45 runs. India though came back well late in the session with Shami and Hardik Pandya removing the set batsmen in a span of three overs. 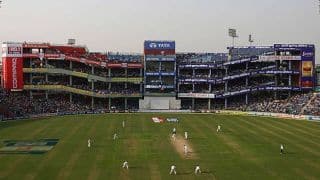