Get all the latest news, views, feature, images and videos from the second Test between India at Lord's from August 9-13.

England thrashed India by an innings and 159 runs to win the second Test at Lord’s on Sunday with visiting skipper Virat Kohli admitting: “We deserved to lose.”

Victory, achieved on the fourth day of a rain-marred match featuring a total first-day washout, put England 2-0 up in this five-match series. India slumped to 130 all out in their second innings, with James Anderson taking his 100th Test wicket at Lord’s en route to four for 23, with Stuart Broad’s four for 44 featuring two wickets in two balls.

Chetan Narula: Lord s Test is a sad exhibit of India s problems of their own making

News: Woakes confident of closing the lid on India

News: I don’t have any one particular role in the team – Pandya

Reaction: Centurion Woakes confident of closing the lid on India

Reaction: I m a batsman while batting, bowler when bowling: Hardik Pandya

News: We would have bowled out any team in world in these conditions: Anderson

News: We were hampered by constant stoppage in play: Rahane

News: Why does the axe have to fall on Dhawan? Asks Laxman

Gallery:India collapses for a paltry 107

When and where to watch: Match timing, squads, TV schedule

Video: What Team India must do to beat England at Lord s

News: Joe Root cites rise of social media for decline of the ‘leave’

News: I am doing as much as I can as captain: Virat Kohli

News: Brilliant hundred from Kohli but he had to battle for runs at Edgbaston: Jos Buttler

News: Virat Kohli’s advice for Ollie Pope: Enjoy the occasion, but don t get too many runs

News: Will look to devise new tricks against Kohli at Lord’s: James Anderson

News: Can t see two spinners at Lord s unless its a raging Bunsen: Nasser Hussain

Video: What Team India must do to beat England at Lord s

News: Dhawan will struggle in overseas Tests unless he changes approach: Gavaskar 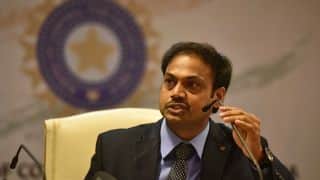