India captain Virat Kohli has called on fans to support the entire team and not focus on just one or two players.

India captain Virat Kohli has called on fans to support the entire team and not focus on just one or two players.

Addressing a gathering of senior diplomats, business chiefs and politicians at a special reception hosted by the Indian High Commissioner to the UK Y K Sinha at his London residence on Tuesday evening, the batsman praised his fellow teammates for their hard work.

“We as a team love playing with each other and play with a lot of passion. I would just say to the fans to support the whole team because we all are giving our best efforts and we all want to win together,” said Kohli, who was accompanied by his Bollywood star wife Anushka Sharma.

“It’s not about individuals or one or two players, it’s about Team India together and that’s the passion everyone should carry off the field as well,” he said.

Kohli, alongside the rest of his squad, interacted with the guests at the reception, signed autographs and posed for selfies.

“It is always wonderful to come to London and interact with people who love the game,” he said.

The reception in honour of the Indian cricket team was hosted by the High Commissioner ahead of the second Test against England at Lord’s, starting Thursday.

“The whole team has played very well. We lost (the first Test), but we lost narrowly. And, I am confident that at Lord’s, the Mecca of Cricket, we will win and go on to win the series,” said Sinha, praising Kohli as the “greatest batsman in the world”.

India are trailing the five-match Test series, having lost their first game at Edgbaston last week. 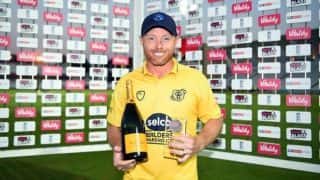 India vs England, 2nd Test: Virat Kohli's advice for Ollie Pope: Enjoy the occasion, but don’t get too many runs