England had got the better of Virat Kohli India at Edgbaston after ten sessions of intense cricket. Had one of the specialist batsmen risen to the challenge of providing support to their captain, India might have got those 32 runs needed to win. Instead, Kohli played a lone hand, scoring 149 (out of 274) and 51 in a low-scoring Test where England prevailed, owing much to an exuberant all-round show from young Sam Curran, some probing fast bowling from Ben Stokes and James Anderson, and important first-innings fifties from Joe Root and Jonny Bairstow.

READ: What India must to do to win at Lord’s

India have four gaping holes to fill in their top order, in the top three and No. 5. Cheteshwar Pujara’s omission at Edgbaston drew much criticism, but to be fair Pujara has been in terrible form this English summer, scoring 172 runs at 14.33 without a fifty for Yorkshire in the County Championship. Pujara had done miserably on the 2014 tour as well.

Shikhar Dhawan (26 and 13), Murali Vijay (20 and 6), and KL Rahul (4 and 13) had all failed at Edgbaston. One may point out that Dhawan had the most runs of the three, there is really little to choose between the three. Rahul’s excellent form (albeit in white-ball cricket) may earn him another chance. The axe is likely to fall on Vijay, whose 102 runs in South Africa earlier this year had come at 17.

Time is running out for Ajinkya Rahane (15 and 2 at Edgbaston) as well. However, Rahane had looked confident against England A with 49 and 48 (Vijay had failed there as well, scoring 8 and 0). In the same match, Rishabh Pant had scored 58 and 61 (in 71 balls); it will be a shame if India do not play him ahead of Pujara. When India A needed 100 with 5 wickets in hand against West Indies A, Pant sealed the chase with a 71-ball unbeaten 67.

Given Dinesh Karthik’s ordinary performance behind stumps at Edgbaston, it will make sense to hand over the big gloves to Pant. Karthik’s form with bat (white-ball success and the Essex match) is impressive, but Karun Nair has also done well this summer (227 runs at 37.90). He may just get the nod.

READ: Sachin Tendulkar has a message for Virat Kohli

Hardik Pandya did not impress with ball at Edgbaston, but his 22 and 31 made him the second-highest scorer of the Test. India are likely to go in with both the same attack as Edgbaston unless the heatwave reduces the Lord’s strip to a dry subcontinent pitch. In that case Kuldeep Yadav may earn a recall.

Ollie Pope will play at Lord’s, but whether he will bat two slots ahead of his usual No. 6 position for Surrey is something that remains to be seen. England may push Jonny Bairstow and Jos Buttler up the order, if necessary. Chris Woakes is likely to get in as replacement for Ben Stokes, provided the pitch does not promise turn. If it does, England may consider Moeen Ali.

Time is probably running out for Stuart Broad, who has not delivered for some time now. Alastair Cook will also be in hunt for a much-awaited big score. The rest seems to be in place for England.

Predictions: England were the better team at Edgbaston, but Stokes’ absence may hurt them at Lord’s. Woakes is definitely not as good with bat, which will weaken the batting line-up, even if not significantly. However, the Indian top order (sans Kohli, of course) had looked too frail; Anderson, Curran, Woakes, and even a nowhere-close-to-his-best Broad may pose serious problems. England will definitely take field at Lord’s as favourites. 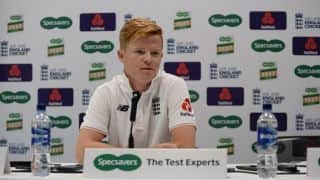