Down 0-1 in the five-match series, Virat Kohli s team have several issues to address before the start of the Lord s Test on Thursday.

Down 0-1 in the five-match series, Virat Kohli s India have several issues to address before the start of the Lord s Test on Thursday.

Shikhar Dhawan was included as opening partner to Murali Vijay at Edgbaston, despite facing four deliveries and failing to score in either innings of India s tour match against a second string Essex. He made 26 and 13, both times guilty of driving at wide deliveries and edging to second slip and the wicketkeeper.

READ: Shikhar Dhawan will struggle in overseas Tests unless he changes approach: Gavaskar

Rahul batted at No 3 instead of Cheteshwar Pujara and scored 4 and 13. He is an opener by trade and has done the job in 22 of his 25 Tests for an average of 43.57. Each of his four Test centuries have come when opening the innings, as have 10 of his 11 fifties. So make him open with Vijay.

Pujara, despite his well-documented struggles against the red ball this season, is a safer bet at No 3. His overseas batting average dips to 35.25 from an overall 50.34, and he only has one Test century outside Asia, but this a batsman who has forged a reputation of being a grinder. What do you want at No 3? A batsman who chases his second ball and drags it onto his stumps, or one that can absorb 53 deliveries for his first run and who owns the record for the longest Test innings by an Indian?

2. Support and protect the middle order

Protecting Kohli and Ajinkya Rahane from the new ball is imperative. This is England, where the ball does a lot, and the English bowlers are skilled at dissecting touring batsmen. Hence the role of the openers and No 3 assumes greater significance. You don t want your best batsman walking out to bat in the 14th or 15th over, as happened with Kohli at Edgbaston. Full credit to Kohli for scoring 149 and 51, but its not going to happen every day and the skipper cannot be expected to do all the run-making.

Similar for Rahane, who averages 49.76 away from India with centuries in New Zealand, England, Australia and the West Indies. Rahane also had a poor match at Edgbaston, but remains a very reliable batsman overseas, having played key roles in India s last Test wins in England and South Africa.

Opinions differ on this one. Eoin Morgan, a man who knows plenty about Lord s given he is Middlesex captain, believes the heat wave in England this summer will make it tough to maintain moisture. Harbhajan Singh, India s most successful finger spinner, says India must play Kuldeep Yadav. Nasser Hussain isn t convinced that adding a spinner is the right approach at a venue where slow bowlers have rarely succeeded.

The fact is: India need to win. And to do that, they need to shake up the bowling. Kuldeep should have played at Edgbaston, given his variations and the hold he s had on England s batsmen this summer. Playing four pacer bowlers did not work for India, with Hardik Pandya bowling just 10 wicketless overs.

If India drop Pandya, they must play Jadeja to cover for the loss of a batting option. If they persist with Pandya and drop one of Umesh Yadav or Mohammed Shami, who each managed three wickets at Edgbaston, then Kuldeep should come in to partner R Ashwin who took seven wickets in the first Test.

In Birmingham, a sorry trend of chances gone down continued for India. In the sixth over, Rahane dived across Kohli at third slip and spilled a thick edge off Keaton Jennings.

During England s second innings, three chances went down. When Dawid Malan was on 10, Dinesh Karthik failed to hold onto a thin outside edge when the batsman flashed at width, undone by the bounce. Then Dhawan missed two, the second of which came at first slip when he collected Adil Rashid s outside edge on the chest but let hard hands balloon the ball out of his grasp and onto the grass. Dhawan s drop of Sam Curran on 13 was a tough chances, but one that needed to be taken. The allrounder went on to add 50 runs to his name, and we all know who the Man of the Match was.

In South Africa earlier this year, drops contributed to defeats in the first two Tests as the series was lost. Was it a coincidence that in the only Test that India won in South Africa, the catchers held every chance that came their way?

5. Don t let England s tail get off the hook

In the second innings, a three-wicket over from Ishant Sharma reduced England to 87/7. They finished with 180. Curran frustrated India while getting England s lead past 150 and eventually to 194 before he was last out for 63. It proved a match-winnings innings. 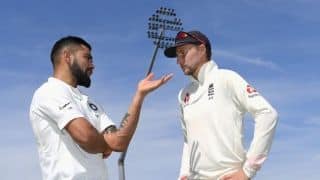