Presenting the key focal points from a third successive day of gripping Test cricket at Edgbaston.

A third consecutive day of enthralling cricket at Edgbaston has ended with India needing 84 runs to win, with five wickets remaining, and England needing to take those five wickets to extend a superb record at this venue. One of them is Virat Kohli, batting on 43.

In a see-sawing contest between bat and ball, punctuated by some mediocre catching, India took the upper hand in the morning session through R Ashwin (3/59) and Ishant Sharma (5/51) to bowl out England for 180. However, that would have been much lesser if not for the rookie Sam Curran s potentially match-turning innings of 63 from the No 8 spot.

In the final session, England s fast bowlers, led by Stuart Broad, hit back to leave India at 110/5 by stumps.

Here are the main talking points from day three in Birmingham.

At Lord s in 2014, Ishant Sharma famously derailed England with a fiery spell of fast bowling. On Friday, he did it one over, spread across the lunch break. And it ripped the heart out of England s middle order.

Ishant s first wicket of that crippling spell of 6.4-0-21-3 before lunch came when he removed Dawid Malan, who was caught at gully by Ajinkya Rahane off a leading edge. Then came the last over of the first session.

Second ball, Jonny Bairstow backed away from an inswinger and stabbed an edge to Shikhar Dhawan at fly slip. Fourth ball, Ben Stokes edged a lovely delivery that pitched and shaped away. Ishant was on fire, his eyes wide with rage. When play resumed in the afternoon, he finished the over he had started so devastating before lunch by forcing a feeble prod from Jos Buttler that Dinesh Karthik easily took. England had fallen from 85/f to 87/7 in six deliveries. Curran, the next big thing?

Standing between Ishant, India and a small England total was the Surrey allrounder, Curran. In his second Test, the 20-year-old underlined a first-class batting average of 27 with a handy 24 in the first innings and in the second he cruised to a combative 63 from 65 balls that could yet prove match-turning.

That innings, coming as it did after a telling display of left-arm pace on day two, and then the wicket of Rahane on day three, has set tongues wagging. At the age of 20, very few English cricketers have made such an impact. KL Rahul can point to replays of a nearly unplayable delivery. Murali Vijay, Dhawan and Rahane? Not at all. Theirs were silly lapses of concentration, the wickets the reward for some very smart pace bowling from England.

Vijay padded up to a fullish delivery from Broad that cut back in to hit the pad, with replays showing that though he was outside the line it did not matter, for he Vijay did not offer a shot. Dhawan drove loosely outside off stump at a full outswinger from Broad, and then came Rahane s daft waft while standing tall. The set-up, to be fair, was lovely: left-armer Curran followed two in swingers with a wider and shorter one and Rahane, who had not scored a run for 14 deliveries, punched outside the line and nicked to Bairstow for two.

Rahul got a ripper from Stokes, which reared up off the upright seat square him up and take the edge to Jonny Bairstow. The key thing here was that Stokes made Rahul play.

Will this Test be known as Kohli s Test?

After a rather marvellous 149 in India s first innings, Kohli again frustrated England by batting his way to 43* by the close of play. The next best contribution was Dinesh Karthik’s 18* as a familiar script unfolded.

Like in the first innings, Kohli s ability to see off Anderson was exemplary. Anderson tempted him with his outswingers but Kohli resisted. Curran beat the bat and curved deliveries back into Kohli, two of which clipped the inside edge. Kohli remained dogged.

There were assured leaves, soft-handed edges that fell short of catches, a few play-and-misses, a nasty blow to the elbow, some effortless clips off the stumps, a very confident appeal from Curran that was reviewed – it was a risk England had to take – and one sumptuous on-the-rise drive off the same bowler that made its acquaintance with the cover boundary before a fielder could move.

So long as India s captain is batting, England will feel uneasy.

A sorry trend of chances gone down continued into the third day, from both sides. During England s second innings, three chances wend down. When Malan – the fielder who dropped Kohli on 21 and 51 during his splendid 149 – was 10, Dinesh Karthik failed to hold onto a thin outside edge when the batsman flashed at width, undone by the bounce. Then Dhawan missed two.

First Curran was let off on 21 when a very tough chance at first slip went to ground, and then Dhawan dropped Adil Rashid at first slip, collecting the thick outside edge on the chest but letting hard hands balloon the ball out of his grasp and onto the grass.

When India s chase began, Malan grassed Vijay in the fourth over at second slip. It was a sharp chance to his right, but he dropped it to give Anderson more agony. 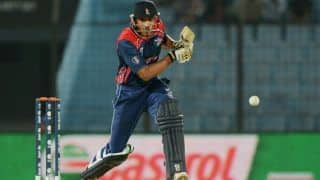