The rain nearly threatened to upset his momentum, and having taken four wickets - including Kohli and Karthik off successive balls - Broad was disappointed to miss a hat-trick.

Stuart Broad, who put the finishing touches on England s innings defeat of India on Sunday at Lord s, has expressed plenty of satisfaction after a comprehensive effort in the second Test which has the home team up 2-0 in the five-match series.

Having declared at 396/7 with a lead of 289 following a maiden Test century to Chris Woakes, England needed 47 overs to roll India over for 130. After James Anderson set the ball rolling with the wickets of India s openers, including Murali Vijay for his 100th wicket at Lord s, it was Broad who ran through the batting with 4/44 from 16 overs.

I think it was a powerful performance by the team right up there, said Broad, whose Test tally now stands at 424 wickets from 120 matches. The emotions of the Test match last week, it took a lot out of us. It was a great of us to come at Lord’s with the same amount of intensity.

The clouds worked for us and also the sun was out when we were batting. We are delighted the way we performed. When the ball is swinging it gets easy, with five slips in place all the time. The economy was good and we didn’t give India any freebies. We made Pujara work so hard for his runs. It was a really strong performance by all our bowlers.

For Broad, who triggered India s downfall in their second innings at Edgbaston, getting a crack at the batting on Sunday was important. The rain nearly threatened to upset his momentum, and having taken four wickets – including Kohli and Karthik off successive balls – Broad was disappointed to miss a hat-trick.

I was gutted with the rain came in, I was really getting in the rhythm. It was nice to get a chance from this end, he said. The hat-trick ball was disappointing, it was so bad. We talked a lot before the series. About the bowlers rotate a bit. We are feeling pretty fresh and we have a few calm days before the Trent Bridge Test. Lord’s is a wonderful place. 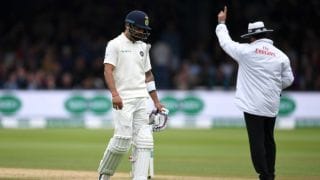