Kohli's captaincy has come for some flak from the pundits but the skipper defended himself saying that he is doing his best.

Captain Virat Kohli today urged followers of Indian cricket to not be judgemental about his team’s poor batting performance after just one Test as the problem is more about making “mental adjustments” rather than technical.

India lost the first Test against England by 31 runs with only skipper Kohli crossing the 50 run mark in both innings.

“We should not judge so fast, and jump to conclusions As a team, we keep patience. We don’t judge so fast. We don’t see any pattern to (the failures). As far as wickets falling in heap is concerned, it is not about technique, it is more of a mental aspect,” Kohli said at the pre-match press conference.

“There must be a clear plan on how to face the first 20-30 balls, and more often than not that plan does not involve aggression. There we need some composure rather than aggression. As a batting unit, we have discussed that,” the skipper said.

Kohli said from a team’s perspective they don’t analyse how bad a defeat can look as their focus in on cutting down on margin of error in the next game.

“From outside, it looks very bad, especially as it is Test cricket and we are playing in England, where it is anyway difficult. But we only need to bring down the margin of error and beyond that we don’t need to worry too much.”

His captaincy has come for some flak from the pundits but the skipper defended himself saying that he is doing his best.

“I am doing as much as I can as the captain and there is constant feedback from the management. People have their own ways of looking at the game and their own ideas when it comes to captaincy and so on, but I feel I have had really good communication with all the players.”

Kohli did drop a hint that a second specialist spinner in either Ravindra Jadeja or Kuldeep Yadav could be an option as the surface looks dry.

“(It) could be a tempting thought. Just walking here the pitch looked very hard and the surface looked very dry. It has been very hot in London for the last couple of months. There is good grass cover on it and that is required basically to keep the wicket together, otherwise it is going to be very difficult to hold it together,” Kohli explained.

“It is a tempting thought to field two spinners but we have to take a call on that depending on the team balance. But two spinners are definitely in contention,” he said.

When asked if it hurt more that India lost after his lion-hearted effort (149 and 51), Kohli begged to differ.

“It doesn’t only hurt when you score runs and you don’t win but it also hurts when you are not scoring runs as well and the team is not doing well.

“It is not like I feel bad that I got runs and we couldn’t get across the line. It is purely because we haven’t won the games. If I hadn’t got the runs and we had won, I would have got a totally different feeling. It is a very natural aspect of playing team sport.”

But world’s premier Test batsman cautioned that every time it won’t be possible for him to score but it doesn’t matter till someone else takes the team over the line. But there isn’t a pattern that India lose outside the sub continent despite his hundreds (it happened in Australia, South Africa and now in England).

“I am trying my level best to do that whenever possible. It is not going to happen every time but when it does I want to try and contribute as much as possible. It is unfortunate we haven’t been able to cross the line after coming so close, and that is the only thing we are looking to how we cross the line. I don’t see any pattern in this.”

“It doesn’t matter whether I get the runs or Jinks (Ajinkya Rahane) does or (Murali) Vijay does or KL (Rahul) does or whoever does. As long as we cross the line, that is the only thing that matters,” Kohli said.

Kohli however didn’t give a clear cut reply whether it was his technique of a pronounced front-foot movement against the likes of James Anderson that stood out unlike others.

“It is very difficult for me to point it out. Individuals react differently to different things, and there are variable reasons as to why a particular player is doing a certain thing on the field. That goes into the preparation bit as well.

“How I prepare will be very different from another player and so on, every other player in the team (prepares differently). You can’t pinpoint exactly what the mindset is when a player goes out to bat.” 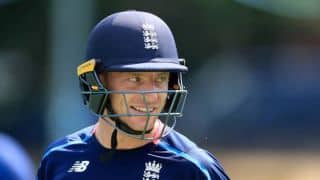