Club director Alec Stewart has kept the doors open for the Indian captain to ply his trade for Surrey but reckons that Kohli's tight schedule may prevent it from happening.

Despite missing out on his much-hyped county participation, Virat Kohli may get to play for Surrey afterall, as far as the county’s director Alec Stewart is concerned. The former England wicketkeeper batsman has kept the doors open for the Indian captain to ply his trade for Surrey but reckons that Kohli’s tight schedule may prevent it from happening.

Speaking the opening day’s washout at Lord’s, Stewart called Kohli the best player in the world and mentioned he would fancy having a cricketer of Kohli’s representing Surrey.

“Never say never. I am all for having world-class players. And he is the best player in the world. But again, itineraries – India’s itinerary, his own itinerary may or may not allow. We will certainly take a look at it if it is possible,” Stewart said.

“We understood the reasons (for him pulling out from Surrey). When a player is injured it is right that they give themselves time to get fit before they play for their national side.”

Kohli officially inked his deal with the top English county side to prepare for the gruelling tour of UK but was ruled out following a neck injury reportedly sustained during the IPL. He required a three rehabilitation to recover, after which the Indian captain successfully passed a fitness test on June 15. He even missed India’s one-off Test against Afghanistan.

Kohli had visited a hospital in Mumbai for a check-up and it was reported that he was suffering from a slipped disc and will not be playing for Surrey ahead of India’s tour of England. However, a top BCCI official, who is privy to Kohli’s county engagements clarified that that it was a case of neck sprain.

In a chat with XtraTime, Stewart rued the fact that Kohli could not come and play for Surrey.

“It was a big blow for everyone but at the same time injuries happen in a professional sport. I had a word with him (Kohli) and he was bitterly disappointed when the neck injury flared up and truly understood the reason. I spoke to the BCCI and they were very apologetic. I fully understand injuries happen to any sportsman. As I said moving forward if there is a possibility ever arise again where he is available to come and play for Surrey we will certainly entertain that fact,” he said.

Kohli’s missed county stint led to debates regarding whether the Indian captain will be able to redeem himself after his abysmal record in 2014. But his 149 and 51 in the first Test of the series at Edgbaston have laid those arguments to rest.

“He is the best player in the world. Whether he played with Surrey or not, that would have little impact on how he went out and played in a Test match,” Stewart, a veteran of 133 Tests, said. “He played beautifully. He has obviously thought through about how he is going to come and play in England against the moving ball, batting outside of his crease, playing the ball later. All these sorts of things, the great players can do. And he is the greatest player currently playing.”

Stewart added that he had a great time watching Kohli bat in Edgbaston, crediting him for the way he dealt with the swinging new ball, being exposed to it early in the innings.

“I enjoyed watching him. It was a real challenge him taking on (James) Anderson and (Stuart) Broad and the rest, and he batted in his own way. He won that one at Edgbaston and England will come at him again in this game, they would have got some options for him,” Stewart said. 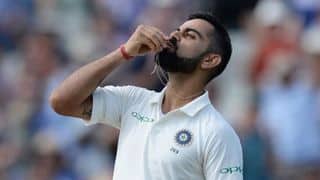 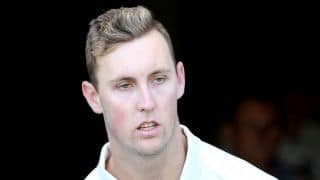