Cheteshwar Pujara was a relieved man after registering his first Test half-century in six innings, but revealed that he was not in any real bother over the lack of a sizeable score.

On day three of the Trent Bridge Test, Pujara battled his way to 72 off 208 balls on a tough surface, in the process adding 113 in 50 overs with his captain Virat Kohli, who made 103 off 197 balls.

Speaking to Sky Sports at the end of the day s play, Pujara said that he was refreshed to have contributed to India s utter dominance over England during the the third Test after a lean county season for Yorkshire and three low scores in three innings of this series.

I ve been batting really well. I didn’t score too many runs this season, but in county I was batting well, said Pujara. I didn’t get many runs so it is good to be amongst the runs. You do fret if you don’t get runs, but the way I was batting in the nets and the way I was moving my feet, I knew a good score was just a game away from a big score. I missed out on a hundred today, but it’s good to get 72.

With questions being asked about his batting abilities against the red ball after a lean run in county cricket for Yorkshire – he averaged 14.33 in six four-day matches, Pujara failed to make an impression during India s three-day tour match against a depleted Essex side. He did not make the cut for the first Test in Birmingham, and at Lord s he was out for 1 and 17.

It’s tough to sit out of the team, due to the team combination, but it’s good to be back in the team and scoring runs. Maybe I would’ve started the series if I didn’t play county, he said with a laugh. It s always good to play county cricket, and I played on some challenging pitches in England during the county season; on those, sometimes you do get out, but it was good to have that preparation. 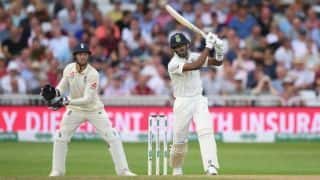