India vs England 2018: Virat Kohli has now scored the most runs by an India captain in away Tests.

As India made hay in batting friendly conditions at Trent Bridge on the opening day of their third Test against England, Virat Kohli ended up with yet another record to his name. He has now scored the most runs by an India captain in away Tests.

Former India captain Sourav Ganguly held the record with 1693 runs in 28 Tests at an average of 43.41 with three centuries and 11 fifties in them. Kohli overtook him during the final session of the Day 1 at Trent Bridge during his unbeaten innings. He has eight centuries and four half-centuries to his name in 19 Tests.

Kohli, 29, is celebrating 10 years in international cricket today and is the first player to hit three centuries in first three innings as Test captain. He has also accumulated six double-centuries as Test skipper – the most by anyone.

Kohli’s India are hoping to launch a comeback in the ongoing five-Test series against England which they currently trail 0-2 after losing the first two matches at Edgbaston and Lord’s. 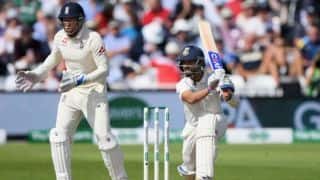