India, after taking control early on, had to work much harder in the second half of the day as Curran revived England from 86/6 to 246.

England, after Joe Root opted to bat, lost two four wickets before lunch and then slumped to 86/6 in the afternoon, until Sam Curran put up tremendous resistance with a career-best 78 to get them to 246 on day one of the fourth Test at The Ageas Bowl. Curran scored 48% of the 160 runs that England s last four wickets added before he was last out, bowled by R Ashwin when attempting a big heave.

His partnership of 81 for the seventh wicket with Moeen Ali (40) and ninth-wicket stand of 63 in 57 balls with Stuart Broad wasted much of the good work India s pace attack had done, and could yet prove match-shifting. In four overs before stumps, India made 19 runs as the new ball continued to move wildly.

England’s 246 is not a total to raise hopes of victory, but it is one from which their bowlers, Curran in particular given he s a left-armer, can aim to put pressure on India on a surface already showing signs of inconsistent bounce. There is also the damning statement of 23 byes, with the rookie wicketkeeper Rishabh Pant forced to repeatedly fling himself left and right to stop errant deliveries from India s quicks. Extras contributed 34 to England s total, the third highest score.

England had limped into lunch on 57/4 after some splendid bowling from Jasprit Bumrah and Ishant Sharma, and then lost two more as Mohammed Shami bowled a fine 12-over spell in the afternoon, but Curran, the 20-year-old back in the side after missing out at Trent Bridge, and Moeen, playing his first Test since March, changed the complexion of the innings. The pair had been joined at the fall of Ben Stokes, and after a watchful start they flourished.

A punch past point off Shami for two was Moeen s first authoritative shot, and two balls later he edged wide of third slip to collect his first boundary, and England s first in nearly eight overs. That was followed by Curran cracking two fours off Pandya and Moeen cutting Jasprit Bumrah past point as a partnership began to blossom.

Maintaining the flourish that saw him claim the Man-of-the-Match honours at Edgbaston, Curran picked up from where he left off at Lord s with a wholly considerate fifty which belied his tender age and the fact that this is his fourth Test. The left-hander was intent on batting out time, but his driving and cutting, particularly, remained attractive and the slighted errors in length were duly punched away for fours. Curran entered with England in disarray and departed having given them runs to bowl at, with the returning Moeen doing what he was drafted into the XI for: to score runs.

Ten minutes before tea, Bumrah bounced Moeen and was hooked for six over long leg. As the stand grew, so too did Moeen s confidence against Ashwin. A straight six took England past the 150-run mark, but it was during this period that a dangerous stand was snapped. On 40, Moeen swept Ashwin, got a top edge and was well held by a running Bumrah at midwicket. Curran, on 37 by this point, continued his uncluttered approach to raise his fifty with a six off Ashwin.

India s pace attack had begun under clear skies on a pleasant Southampton morning by hurting England in quick time. Thirteen deliveries into the Test, Keaton Jennings woeful series took another turn for the worse, as he thrust out his front pad at a ball from Bumrah that stayed low and was sent on his way lbw for 0.

Another no-ball from Bumrah gave Root a life on 4 – replays showed the ball was headed into leg stump – but as it turned out, it didn t cost India a single run. Root was out lbw to Ishant, courtesy a very fine delivery that came in with the angle and beat the England captain as he fell forward on his shot. It was Ishant s 250th Test wicket, and 50th against England.

Jonny Bairstow was the next man in, and though he emerged to cheer from the crowd given he was playing with a recently fractured left middle finger, he looked unconvincing against Bumrah and Ishant. Bairstow lasted 16 balls before he was made to play at another lovely ball from Bumrah which pitched, straightened and took the edge. Ishant bowed out with a terrific opening spell of 6-3-7-1, and Pandya came on ended Cook s 55-ball vigil on 17, the former England opener cutting and edging low to third slip where Kohli held a very fine catch before the ball could hit the ground.

After Ishant and Bumrah in the morning, the star for India in the afternoon was Shami, who was thrown the ball after 16 overs and responded with a full and straight 12-over spell that exploited the slight movement in the surface. Pant s drop of Buttler when he was 11 also did not cost India much, for on 21 Shami found the batsman s edge and Kohli, at third slip, took another good catch. This wicket came amid a sharp spell from Shami, who found appreciable movement off the pitch.

Stokes applied himself watchfully for 78 balls, but then got an in-cutter from Shami that hit on the flap. Stokes reviewed, the on-field decision by Bruce Oxenford stood and England slumped to 86/6. Curran proved a thorn in India s side thereafter, and enabled them to finish with what could be a very good total. 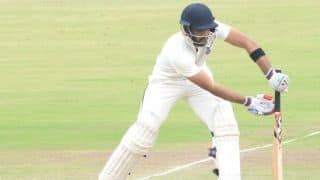 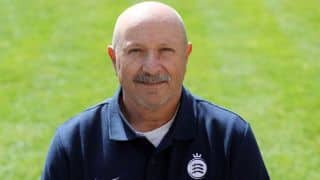 Dave Houghton set to join Derbyshire as Head of Cricket