Broad highlighted that it s their fighting spirit which has kept them alive in the game.

England fast bowler Stuart Broad is proud of the way his team has performed in the fourth Test against India at Southampton, highlighting that it s their fighting spirit which has kept them alive in the game. From 122/5, England were revived by Ben Stokes (30), Jos Buttler (69) and Sam Curran (37*) to end day three at Southampton on 260/8 a lead of 233.

Writing for the Daily Mail, Broad lauded Moeen Ali and Sam Curran s contributions, along with the others, as England wrested back advantage over India.

“What I’ve really enjoyed about this game is the character we’ve shown to keep fighting back. We were 86 for six on the first day before Sam Curran batted brilliantly for 78. Then India were 140-odd for two on Friday before Moeen Ali got to work with his off-spin,” Broad said.

“Even on Saturday, we were in a spot of bother until Ben Stokes and Jos Buttler knuckled down. Stokes’ 30 felt more like 60 and Jos’s 69 was more like a hundred. We may not be making the totals we’d like but we’re finding a way of putting pressure on India.”

Broad was particularly impressed with of 20-year-old Curran, whose all-round exploits have become the talk of the Test series. In the first Test at Edgbaston, Curran dented India with the ball picking up 4/74 in India s first innings. After missing the third Test at Lord s, Curran was drafted back into the England side and dug England put of trouble with a counter-attacking 78 in the first innings. In the second inning, Curran is unbeaten on 37.

As for Sam, what you’d say about him. That’s what international cricket is about. Sometimes you look for character over skill. He keeps scoring important runs and he’s also chipped in with the wicket of Virat Kohli.

We also keep talking about the importance of 50 partnerships down the order and I managed to put on some runs with Sam in our first innings. If you’re all out for 120, the game’s gone. But if you can scrape 240, as we did, then you’re in with a chance. It’s up to us now to seal the series. It’s going to be a fascinating day.

Broad was no short of praises for his long-time team-mate Ali, who has been phenomenal for England in this Test. From scoring a dogged 40 in the first innings to picking up a five-wicket haul, Ali couldn t have hoped for a better performance in his comeback Test. With the surface beginning to turn, he is expected to repeat his first-innings performance as England aim at sealing the series.

“It’s been great to see Mo and Sam do so well. Mo’s come off a six-for and a double-hundred for Worcester which is always a good place to be. I think he’s at his best when he’s controlling his spell how he wants to bowl, how to set his field,” Broad said.

“If you’re a fan of cricket, get down to the Ageas Bowl on Sunday because it could be a cracker. We’ll need 10 wickets and India will face a tough run chase. Whoever ends up winning, this game has summed up the best of Test cricket. Every ball counts.” 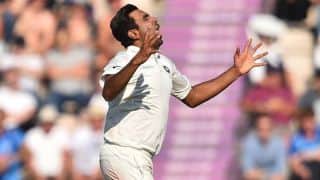