Ishant Sharma missed the series against New Zealand due to chikungunya.

Mumbai: Fit-again pacer Ishant Sharma is likely to make a comeback when the national selection committee meets on Wednesday to pick the Indian team for the upcoming Test series against England commencing November 9. “The Indian team is to be picked in Mumbai tomorrow,” BCCI sources told PTI today. Although India trounced New Zealand 3-0 in the previous Test rubber, the selection panel, headed by MSK Prasad, will have quite a few things to consider before naming the team for what would be a five-match rubber. Injury to opener K L Rahul in the opening Test at Kanpur and the indisposition of Ishant Sharma gave the selectors an opportunity to recall veteran opener Gautam Gambhir and off break bowler Jayant Yadav for the second Test at Kolkata. Full Cricket Scorecard: India vs England 1st Test at Rajkot

Gambhir did not play at Eden Gardens but got a chance to renew his interrupted career after a two-year gap when Shikhar Dhawan suffered a finger injury at Kolkata and was ruled out of the third and final Test at Indore. Karun Nair was included in Dhawan’s place in the squad but did not make the playing eleven. Yadav also did not figure in either Test elevens. It would be interesting to see whether the selectors repose faith in Gambhir, who made a half century in the Indian second innings at Indore, if Rahul and Dhawan are both passed fit to play. Gambhir also made 147 in Delhi’s last Ranji match against Odisha.

Pace bowler Ishant is expected to be included after recovering from Chikungunya. He was picked for the opening Test against New Zealand at Kanpur but could not play any part in the rubber. He has played 2 Ranji matches, bowling more than 40 overs at good pace. The rest of the squad, to be led by Virat Kohli, is expected to be retained. Meanwhile, the visiting England squad is scheduled to arrive in this city tomorrow from Bangladesh after drawing the two-Test rubber against the hosts. READ: India vs England, 1st Test: Gujarat CM to attend series opener

KL Rahul and Bhuvneshwar Kumar have not played a single match since they got injured and their match fitness is yet to be proved. While Rahul is nursing a hamstring strain, Bhuvneshwar is dealing with an ankle injury and it is unlikely that any of the two would get a chance unless they are able to prove match fitness.

Similar is the case of Dhawan, who is nursing a finger injury. Meanwhile, the visiting England squad is scheduled to arrive in this city tomorrow from Bangladesh after drawing the two-Test rubber against the hosts. READ: James Anderson s unavailability a massive setback for England, but all is not lost

They are not scheduled to play any practice game and will have just one practice session on November 5 at the Cricket Club of India before leaving for the venue of the opening Test, Rajkot, according to BCCI sources. “Currently they are to have just one practice session. If they want more it will be arranged,” the sources informed. England would depart for Rajkot, ahead of the series opener from November 9-13, either on November 5 evening or the next morning. 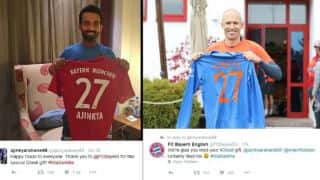