England have made two changes to their 13-man squad from the opening Test against India which they won by 31 runs.

England have made two changes to their 13-man squad from the opening Test against India which they won by 31 runs. For the second Test, to be played at Lord’s, England have dropped Dawid Malan and called up uncapped Ollie Pope as his replacement.

Ben Stokes, who misses the second Test on account of his trail for affray, has been replaced by Chris Woakes while rest of the squad remains unchanged.

The 20-year-old Pope represents Sussex in County Championship and is the second-highest run-getter in the Divison One this season scoring 684 at an excellent average of 85.50 including three centuries and a top-score of 158 not out.

“Ollie Pope has made an exceptional start to his first-class career,” England national selector Ed Smith said. “He has reached a 1000 first-class runs in just 15 matches and is the first division s stand-out batsman this season with 684 runs at 85. The selection panel believe that Ollie’s performances and character suggest he is well suited to international cricket.”

Malan had a horrible outing at Edgbaston as he managed 28 runs across the two innings for England. He also dropped India captain Virat Kohli – twice at slips- allowing him to score his 22nd century as India staged a late recovery.

“Dawid Malan drops out of the squad for Lord s. Dawid has not found his best rhythm this season, and it may be that his game is better suited to overseas conditions,” Smith added.

Waokes missed the Edgbaston Test as the team management felt the pace-bowling allrounder did not have enough overs under his belt following a recovery from a knee injury. However, with Stokes unavailable, he has been able to find a place in the list of 13.

“Ben Stokes is unavailable, but Chris Woakes, with some extra matches and practices under his belt, can now return to the England squad after injury,” Smith said.

Both Moeen Ali and James Porter, who were released for their respective county teams after not being included in the playing XI at Edgbaston, have been retained. 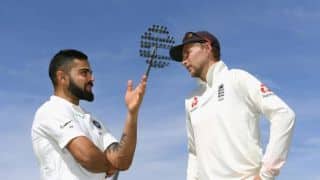