New Zealand captain Kane Williamson reckons the emphatic Twenty20 International series win against India will be kept in isolation keeping the ICC World Cup 2019 in mind. The Black Caps sealed a thrilling four-run win in the series decider on Sunday after India will just one hit away from history.

We were sitting down and looking at what can we get at the end out of the series. It s just about each game as it comes. Like I said, we are looking at this series as an isolated series, he said at the post-match press conference.

We just don t want to sit down and ask ourselves what we want to see in terms of end point, we just wanted to gel as a group, play the sort of cricket we wanted to play, and I think we did see that. The first game was a very good performance. It s not always going to happen in T20 cricket and we saw that in the second game. (ALSO READ: Great to have batted with Colin Munro at the top of the order: Tim Seifert)

In the all-important final, Colin Munro shrugged off a string of low scores to help himself to a blistering 40-ball 72 as he combined with Man of the Series Tim Seifert, to put 80 runs for the opening wicket after New Zealand were asked to bat. The hosts piled a mammoth 212/4.

I thought the guys held their nerves in the second half where it was difficult. India came out and played some fantastic cameos, but we were able to get those wickets at key moments, Williamson, who scored 27 off 21, said. 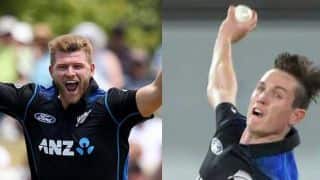