Gary Stead has not ruled out Colin Munro, however, with four ODIs left to the World Cup.

New Zealand coach Gary Stead has hinted that Henry Nicholls, who opened in Thursday’s eight-wicket win over India, could slot in at the top of the innings at this year’s ICC Cricket World Cup.

While Nicholls had never previously opened the innings for New Zealand, his unbeaten innings and Munro’s poor form could see the Blackcaps use Nicholls for the last ODI versus India and the upcoming three against Bangladesh, which are the last ODIs they play before the World Cup.

“Part of our campaign plan for this Indian series was to look at options at the top of the order, and Henry Nicholls has been a bit of a fix-it man across a number of areas. I know from my time when I was coaching Henry at Canterbury that he had opened before so it wasn’t a real surprise to me that he could do this,” Stead told Radio Sport Breakfast. “In terms of the future and where we go, who knows at this stage. Colin Munro is certainly in our plans; I think it’s likely that Henry will get another go in the short-term though.” (READ MORE: I won’t drop struggling Blackcaps stars: Coach Gary Stead)

Nicholls, 27, has featured in 37 ODIs from which he averages 35.60 while batting everywhere from Nos 3-7 apart from the latest experiment as opener.

Speaking after the fourth ODI, he said he was ready to fill the role if required.

“It’s something Steady has talked to me a little bit about as being an option throughout the summer. Then a couple of days out he let me know that was going to happen,” Nicholls said. “It wasn’t too much of a change, I’ve done it for Canterbury quite a bit and it’s just about making a mental adjustment that you can have a bit more time to bat than usual. It was nice and something I enjoy doing.

“It’s not something I’ve put my target on. In terms of a role in the team, if that’s what’s needed, like batting at six was for the last couple of years, whatever that role is I’m happy to fill it.” 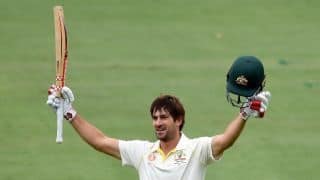