India cruised to victory with seven balls to spare.

India avenged their record 80-run defeat in the series opener and romped home to a seven-wicket win to level the three-match Twenty20 International series against New Zealand at the Eden Park in Auckland on Friday. (India vs New Zealand, 2nd T20I: FULL SCORECARD)

Opting to bat, the hosts set a modest 159-run target that was never enough considering the small dimensions at the Eden Park. New Zealand stuttered at the start with Krunal Pandya s three wickets reducing the Kiwis to 50/4 in the eighth over.

After the departure of Tim Seifert, the hero in New Zealand s opener at Wellington, for 12 off Bhuvneshwar Kumar, the elder of the Pandya brothers had Colin Munro (12), Daryl Mitchell (1) and captain Kane Williamson (20). However, a 77-run partnership for the fifth wicket between Colin de Grandhomme (50) and Ross Taylor (42) steered the innings to safety.

The target proved to be insufficient as stand-in skipper Rohit Sharma found his form just in time to as he tonked three boundaries and four sixes in his 29-ball 50 and became the highest run scorer Twenty20 International history as India cruised to victory with seven balls to spare. (ALSO READ: Rohit Sharma becomes highest run-getter in T20Is)

It felt really nice to contribute for the team. It’s always special when you contribute to a win. The dimensions are quite different from Wellington, the straight boundaries were short and I had to adjust my length to it, Krunal, who returned with figures of three for 28, which won him the Man of the Match award, said at the post-match presentation ceremony.

The decider of the series is at Hamilton on Sunday. Looking forward to the decider in two days’ time, Krunal said. 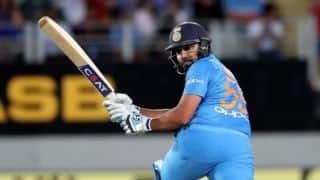 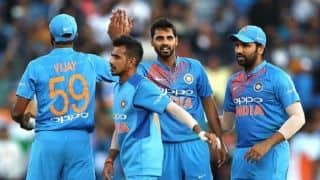