Mitchell was given lbw by TV umpire Shaun Haig after HotSpot showed a snick.

The contentious nature of the Decision Review System (DRS) was once again to the fore during the second T20I between India and New Zealand at Eden Park on Friday, with the rookie allrounder Daryl Mitchell‘s lbw verdict from third umpire Shaun Haig despite HotSpot showing an edge off the bat.

The controversial incident occurred during the sixth over of New Zealand’s innings. On the last ball from left-arm spinner Krunal Pandya, Mitchell tried to work a flat arm ball across his front pad and missed it. Pandya immediately went up in appeal, and after a thought the umpire Chris Brown raised his finger.

From the nonstriker’s end, Kane Williamson walked down to Mitchell – playing his second international match – and had a word with his partner after which the rookie requested a review. (LIVE UPDATES: INDIA vs NEW ZEALAND, 2nd T20I)

Replays soon showed a white blot on HotSpot as the ball passed the bat, suggesting an inside edge. However, when the DRS showed the ball hitting all three wickets the verdict for lbw was upheld by TV umpire Haig, to Williamson’s shock. The New Zealand captain immediately raised his arms in frustration and had a word with while from square leg, the other umpire Wayne Knights walked over to speak with his colleague.

Once the verdict was upheld and the umpires asked Mitchell to move on, Williamson shook his head while sections of the stadium booed.

As per the revised ICC rules in 2017, an appeal can be withdrawn and the umpires can recalled a dismissed batsman at any time before the ball comes into play for the next delivery. That means that Rohit could have called him back if he saw it fit, but in this case there was no such gesture. 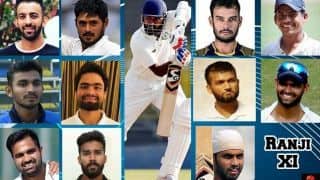