India are playing at 171 for 6 against New Zealand in the second innings of the second Test at Eden Gardens, Kolkata.

Rohit Sharma and Eden Gardens legacy continued as he struck his 29th half-century in second Test against New Zealand in Kolkata on Sunday. Rohit had to carry the responsibility after skipper Virat Kohli fell for 45 post lunch. Rohit took 4 fours and 2 sixes to reach this stage. Rohit secured his sixth half-century with this innings. Rohit got his second fifty in this Test after scoring unbeaten 68 along with Jadeja in the second innings of the first Test. India are at the moment leading by 283 runs. Along with Rohit is India s yet another local boy Wriddhiman Saha who is playing at 26. Both have put up partnership of 65 runs as well. Kohli, who was aiming for his 13th half-century, was dismissed for Trent Boult. New Zealand pacers played their bit as they reduced India to 43 for 4. Full Cricket Scorecard, India Vs New Zealand 2nd Test at Kolkata

Rohit also saw the wicket of Ashwin s wicket as well and since then this crucial partnership between Saha and him plays an important role to take India ahead of 300-run mark. A lot had been said on Rohit s performance in the Test arena. This brings to the same scenario when India were 83 for 5 against West Indies in 2013, Rohit s maiden Test. It was Rohit then who turned out to be the savior through crucial partnerships with MS Dhoni and Ravichandran Ashwin, who also secured a century. His score of 177 will always be remembered for providing India their victory against West Indies by 51 runs and an innings.

Earlier at lunch, India s fast bowlers led by Bhuvneshwar Kumar dismissed New Zealand for 204, helping the hosts secure a vital 112-run lead on the third day of the second Test in Kolkata Sunday. The hosts were 12 for no loss at lunch with Murali Vijay on seven and Shikhar Dhawan on four, stretching India s second innings lead to 124 runs. Kumar (5-48) and Mohammed Shami (3-70) shared eight wickets between them to hand over the advantage to India, who won the first Test in Kanpur to go 1-0 up in the three-match series, AFP reported. ALSO READ: IND vs NZ 2nd Test: Rohit Sharma-Eden Gardens, a timeless saga

New Zealand s Jeetan Patel (47) and BJ Watling put on 60 runs to reduce New Zealand s first innings deficit, after the visitors started the day on 128 for seven in response to India s 316. 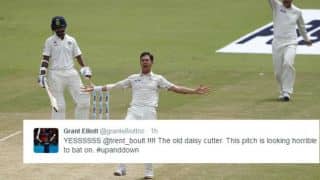 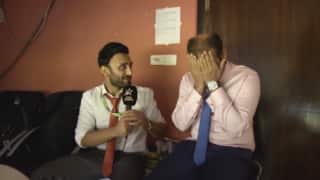