The World Cup semi-final at Old Trafford was forced into the reserve day on Tuesday.

Rain in Manchester on Tuesday forced the first semi-final of the ICC Cricket World Cup 2019 between India and New Zealand into the reserve day, making it the first instance of a World Cup knockout fixture spilling over into a second day.

New Zealand, after opting to bat, were 211/5 in 46.1 overs when rain arrived and prompted the on-field umpires to take the two teams off the field. The Old Trafford ground staff worked hard to get the field of play into good conditions, but after the final inspection at around 6:25pm local time the day’s play was called off.

Weather permitting, the semi-final will resume at 10:30am local time on Wednesday (3:00pm IST) with New Zealand to resume their innings from where it was halted, and the remaining 23 deliveries to be bowled before India’s chase.

While this marked the first instance of a World Cup knockout fixture being pushed into a reserve day, it has happened before during an ICC event final – back in 2002, when India and hosts Sri Lanka were declared joint winners.

On September 30, 2002 the final of the Champions Trophy in Colombo was hit by monsoon rain. Sri Lanka had been limited to 222/7 in their 50 overs, and India reached 38/1 in 8.4 overs before the rain arrived. No further play was possible, and the match officials were forced to push the final into a second day. The weather did not let up the following day, and Sri Lanka and India were declared joint winners of the tournament.

During the 1999 World Cup in England, a group stage match between India and England was halted by play. On the reserve day, Mohammad Azharuddin’s Indian team completed a 63-run win.

No other ICC knockout match has been hit by rain and forced into the reserve day. 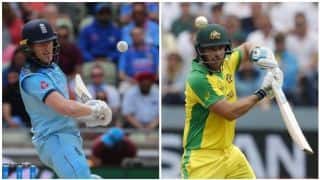 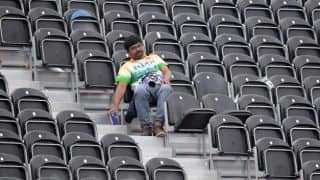