With the ICC World Cup 2019 round the corner, Stead said they are trying to find the right eleven.

Mount Maunganui: New Zealand coach Gary Stead Saturday said that the biggest challenge for his batsmen in the remainder of the series is to build partnerships at the top of the order.

New Zealand were dismissed for 234 in reply to India’s 324 for 4 to suffer a 90-run loss in the second ODI. The hosts had lost the opening match by eight wickets.

Asked about the performance, Stead said: “It (performance) has improved slightly but obviously not a polished performance from us,” Stead told reporters on Saturday.

“They batted well and I was thinking it could have been 350-plus. So, I am pleased with the back-end bowling performance there. In the end, the work Doug Bracewell put in was a promising sign, but it wasn’t a complete performance by any means.”

New Zealand failed to build a partnership at the top with No. 8 batsman Doug Bracewell (57) sharing 58 runs with No. 10 Lockie Ferguson.

“We haven’t built partnerships across the top 6-7, which was the strength of what we did so well against Sri Lanka and what we haven’t clicked or done here yet. As a batting unit, that is going to be our challenge going into the next three games, to build those partnership,” the coach said. (ALSO READ: This loss against India is a little frustrating: Williamson)

“Our guys know that you can’t rely on the lower order to win games, it s got to be the top order to score the majority of the runs, we haven’t done that as yet in the two games.

“I still have faith in our squad, we are still in someway experimenting, trying to work our what is our best XI is, and it is an ongoing thing, it will slightly change with the conditions as well,” he said.

New Zealand struggled against the wrist spin duo of Kuldeep Yadav and Yuzvendra Chahal, who accounted for 12 wickets out of 20 wickets.

“We didn’t have the partnerships, it is not that we can’t play spin bowling, it is just that we have taken some options which haven’t been the best option at times,” he said. (ALSO READ: Rahul Dravid chalks the way forward for Indian cricket)

“Look, I have faith on our guys. We played spin very well against Sri Lanka, so it is not like we can’t, it is just that we haven’t done it as effectively here.”

Talking about the Indian spinners, Stead said: “The two wrist spinners that they have here are very effective spinners. Our challenge is to find a way to be better.

“But look we wanted to be with the run-rate, in terms of the target we set ourselves with, it is the wicket that hurt us so we have to find a way to minimise that specially in the first 30 overs.”

With the ICC World Cup 2019 round the corner, Stead said they are trying to find the right eleven.

“The World Cup is still secondary. We want to win this series first and foremost. We are just still working on what we think is our best 11 and how to balance the team with right number of all-rounders, batsman and bowlers, we are still working on that,” he said. (ALSO READ: ‘Until opposition teams find ways to read Kuldeep Yadav and Yuzvendra Chahal, they will not succeed’)

“But to be perfectly honest is secondary thing for me at the moment, it is still about working out in this series what we need to do to win three on a row now. 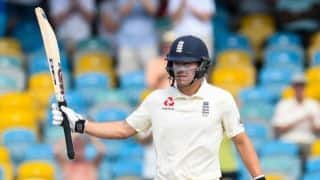