The Indian team will leave for Napier on Monday morning where the first ODI will be played on Wednesday.

Auckland: The Indian cricket team on Sunday touched base in Auckland for their upcoming limited overs series against New Zealand, starting January 23.

The Indian team will play five ODIs and three T20 Internationals during their three-week stay in the country.

The BCCI uploaded a small video of Indian cricketers coming out of the Auckland airport, amidst cheers from a small but vocal pack of Indian supporters. (ALSO READ: Nobody has MS Dhoni’s nerve for finishing off victories: Ian Chappell)

The likes of Kedar Jadhav and Dinesh Karthik were seen signing autographs as the loudest cheer was reserved for skipper Virat Kohli and his wife Anushka Sharma.

The Indian team will leave for Napier on Monday morning where the first ODI will be played on Wednesday. 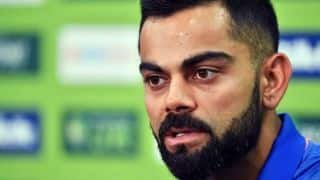