Bumrah, who started with a wicket maiden in the fifth T20I vs NZ, became the bowler with most maidens in T20I cricket surpassing the record of former Sri Lanka pacer.

Shrugging off the disappointment of Wellington T20I, India’s pace ace Jasprit Bumrah touched top notes on Sunday when he starred in India’s seven-run win over New Zealand in the fifth and final match at Bay Oval, Mount Maunganui. Apart from guiding India to a historic clean sweep of New Zealand, Bumrah also scaled a personal milestone in the shortest format. He went past former Sri Lankan pacer Nuwan Kulasekara to become bowler with the most number of maidens in T20I cricket.

In the fifth T20I, the 26-year-old Bumrah picked up a three-wicket haul while giving away only 12 runs in his quota of four overs. During the match, Bumrah bowled a maiden over which took his overall tally to seven maidens, one more than Kulasekara (6 maidens). The Indian pacer achieved the landmark in 178.1 overs, whereas Kulasekara took 205.1 overs to bowl six maidens.

Among others, Harbhajan Singh, Ajantha Mendis, Johnston, Mohammad Aamir, Mohammad Nabi and Naveed have bowled five maidens each in the shortest format.

For his outstanding effort with the ball at Bay Oval, Bumrah was adjudged the ‘Player of the match’. Overall, the Ahmedabad-born pacer is also India’s highest wicket-taker in T20I cricket. He has 56 wickets from 48 matches.

Chasing 164 to win to avoid a whitewash, New Zealand were restricted to 156/9 as India swept the series 5-0. “Feeling very good. The match got close at one point but we had belief that if we can squeeze in one or two good overs, the match can get close,” Bumrah said after the match.

“It was windy, I was trying to use the wind and the longer side of the boundary. Very happy with the learnings, different ground dimensions, first time in New Zealand; great result,” he added.

Returning from a long injury layoff, Bumrah looked initially at the start of the series and was taken to the cleaners by Kane Williamson in the third T20I. But the pacer was at his best on Sunday as he hardly gave anything away and executed his yorkers to perfection too. 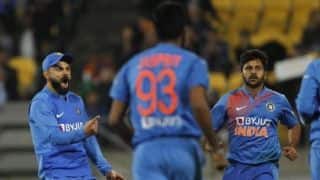