Williamson said that 150 on the board on a surface where 250 was par was hard.

India began their tour of New Zealand after a successful outing in neighbouring Australia on a fine note clinching the opening one-dayer of the five-match series by eight wickets at McClean Park in Napier on Wednesday. (India vs New Zealand, 1st ODI: FULL SCORECARD)

Indian bowlers made a mockery of the so-called batting paradise at Napier with Kuldeep Yadav and Mohammed Shami orchestrating the Kiwi downfall as the hosts were dismissed for just 157.

“It wasn’t our best effort. We expected India to be good and they were very good. It wasn’t the traditional surface here. But it wasn’t hard. We just had to get through the slower balls, but I do think their lengths were immaculate. Obviously 150 on the board on a surface where 250 was par was hard,” New Zealand captain Kane Williamson said at the post-match presentation. (ALSO READ: Virat Kohli happy with ‘most balanced performance’)

Chinaman Kuldeep finished with four for 39, while Shami returned with figures of three for 19 in his six overs. The other wristspinner Yuzvendra Chahal took two for 43.

India were provided the perfect platform for the chase with openers Shikhar Dhawan and Rohit Sharma forging 41 runs before Doug Bracewell got rid of Rohit for 11.

As soon as captain Virat Kohli joined Dhawan in the middle, play was stopped interestingly due to sun outrage. When play resumed, India’s revised target was 156 in 49 overs. (ALSO READ: Shikhar Dhawan is second fastest Indian to 5000 ODI runs)

“Sometimes it helps [break between playing]. It was lack of adjusting to the surface. Sometimes you come here and think it’s 350-plus. This one needed a bit more graft. All the Indian bowlers contributed but we do need to be better. I do think our energy in the field and with the ball was good though and we need to move on from this game quickly,” Williamson, who top scored with 64, said. 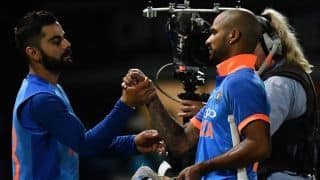 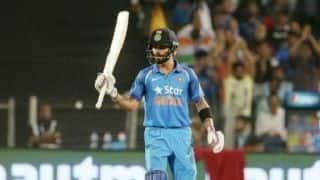