India have set a target of 193 for Pakistan to win the second T20 International at Ahmedabad on Friday. 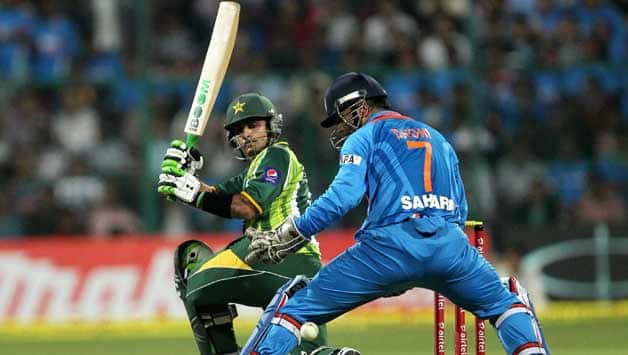 India have set a target of 193 for Pakistan to win the second T20 International at Ahmedabad on Friday.

Yuvraj Singh starred with the bat scoring a 35-ball 72, a knock that included seven sixes and four boundaries.

Ajinkya Rahane and Gautam Gambhir took India off to a good start managing 44 runs off the first 4.4 overs after which Gambhir was dismissed. He struck three consecutive boundaries off Umar Gul in the fifth over of the match.

Rahane scored 28 in 26 balls before he was caught and bowled by Gul.

The 7 ft 1 inch tall Mohammad Irfan bowled a tight line and troubled the batsmen with the steep bounce. His toe-crusher to Yuvraj caused some trouble to the Indian all-rounder. Irfan gave away just 20 runs in his four overs.

Virat Kohli looked in good touch a he stroked 27 runs in 22 balls before being run-out by Ajmal.

Earlier, Pakistan skipper Mohammad Hafeez won the toss and put India into bat first. Pakistan came into the game without any changes from the side that won the first encounter between the two teams. India, after falling short of a genuine spinner in the first game replaced Ravindra Jadeja with Ravichandran Ashwin.