India will to make it six-nil with a victory over Pakistan in their opening World Cup game.

India take on Pakistan in a high voltage contest in their ICC Cricket World Cup 2015 fixture at the Adelaide Oval on Sunday. The sides clash in a World Cup encounter for the sixth time, with India holding the clear advantage at the start of the game, having won all the five contests against the opponents in the International Cricket Council’s (ICC) flagship tournament.  India vs Pakistan Live Score

Both teams have struggled in the recent past. While India failed to win a game throughout their tour of Australia, barring a warm-up match against minnows Afghanistan, Pakistan head to the multi-nation tournament after getting whitewashed 0-2 in a recently-concluded One-Day International (ODI) series against co-hosts New Zealand. They had earlier lost a five-match ODI series 2-3 to the same opponents, but during the latter’s tour of the United Arab Emirates (UAE).  ICC Cricket World Cup 2015: SCHEDULE & MATCH DETAILS

Pakistan will miss the presence of Saeed Ajmal and Mohammad Hafeez, who were mainstays in the bowling and batting department respectively. Ajmal, in particular, had the ability to single-handedly win matches for his side. Hafeez’s all-round abilities have come in handy for his side on many an occasion. Also in doubt for tomorrow’s match is opening batsman Nasir Jamshed. ICC Cricket World Cup 2015: Complete Coverage

India, on the other hand, have been struck with a spate of injuries in the side, with a shadow cast over the fitness of important names such as Rohit Sharma, Ravindra Jadeja, Bhuvneshwar Kumar ahead of their tournament opener. MS Dhoni however, declared his side fit a day ahead of the clash, despite Bhuvneshwar in doubt.

Viewers in the United States of America can watch the match live on espn.go.com. ICC Cricket World Cup 2015: POINTS TABLE

Live streaming has fast caught up in an age in which the world is increasingly becoming smaller, enabling us to watch all the action from the centre as it unfolds wherever we are. Gone are the days when one would have to rely a radio, or worse, read the report on the following day if he/she did not have the facility of a television. All one needs these days is the simple click of a mouse/touch of the screen to get in sync.

Like many other aspects of the digital age, one must ensure to not fall victim to fake live streaming websites, which would probably number in thousands should a census take place. Such sites not only cause a major headache to the user due to the constant redirections to other sites, it also can lead to a virus attack. 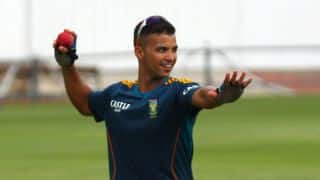