India captain Mahendra Singh Dhoni didn't hide his disappointment in the manner Mohit Sharma and Bhuvneshwar Kumar bowled with the new ball as the visitors lost the first ODI against South Africa by a whopping 141-run margin.

India captain Mahendra Singh Dhoni didn’t hide his disappointment in the manner Mohit Sharma and Bhuvneshwar Kumar bowled with the new ball as the visitors lost the first One-Day International (ODI) against South Africa by a whopping 141-run margin.

This is the ninth time in recent matches that Indian bowlers have conceded in excess of 350 runs but Dhoni seemed livid about how they bowled with the new ball.

“More than the death bowling, our bowling with the new ball was not upto the mark. Shami bowled really well as he hit the right areas but rest of the bowlers didn’t. I think we need some more pace,” a worried skipper said at the post-match presentation ceremony.

Dhoni was the first to admit that on the New Wanderers wicket, the bowlers shouldn’t have conceded in excess of 350.

“Bowling department let us down. If you give away more than 350 runs, batsmen will be under pressure. On wickets like these, we will find it difficult to score freely,” the skipper said when asked about the batsmen’s failure to cope with the pace and bounce of the wicket.

Dhoni sustained a thumb injury while batting which required medical assistance but the skipper assured that he is “fine and ready for the next game”.

Questioned on the lack of preparation for this kind of surface coming from the sib-continental featherbeds, Dhoni defended the decision to arrive late.

“We knew we had two to three days but we could have adapted slightly better.”

Winning captain AB de Villiers said that it was “important to be confident” on the field.

“After the game, we will have a drink and will be friends but in the field, we won’t back down especially in our own conditions. Lots of credit should go to Hashim Amla and Quinton de Kock. Especially de Kock, who at such a young age scored that big hundred as we all batted around him,” the skipper said.

The South African captain was all praise for Dale Steyn who terrorized the Indian batsmen with pace and swing getting three for 25 from just 8 overs.

“He’s (Steyn) a bit of a freak with new ball. Congrats to Dale for the splendid performance.”

On his own innings, De Villiers said, “This innings gave me pleasure but it is JP, who made it look easier in the end.

We knew that wickets in hand with the kind of bowling attack they have, we can put them under pressure in the end”.

De Villiers also expressed caution that Indians being the No 1 ODI team in the world will certainly “bounce back” but they have a “sniff” as they eye a series win in Durban.

Man of the match de Kock said, “I am very proud as well as happy for what I have done today. I hope to carry on with the good work. Getting a man of the match award is a special thing but I am happy and thanks to teammates. Hope to get a couple of more in next two games”. 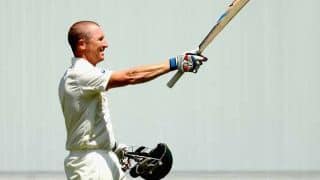