India are gunning for a record-breaking 11th consecutive series at home.

India already announced their playing XI on the eve before the match. While captain Virat Kohli confirmed Rohit will open alongside Mayank Agarwal, notable exclusion came in Rishabh Pant, one who has been pitted as MS Dhoni’s successor, who was dropped with senior wicketkeeper Wriddhiman Saha reclaiming his position back in the side.

Rohit failed to demonstrate his credentials in the build-up to the match when he was bowled for a two-ball duck in South Africa’s sole warm-up game before the series. However, that should not deter his confidence and with KL Rahul dropped due to lack of runs, Rohit opening the innings could be a blessing in disguise for India which could also give the think-tank a settled opening pair.

The series will also be an important one for Ravichandran Ashwin, who lost his position as the primary overseas spinner. Conditions favourable for spinners will give the Tamil Nadu tweaker added motivation to perform. Hanuma Vihari, who also been included in the playing XI, will be the third spinning option along with Ravindra Jadeja.

Jasprit Bumrah’s absence is a big blow but trust Ishant Sharma and Mohammad Shami to do the job for India.

India are clear favourites against South Africa, who are going through a period of transition. Only five players, including skipper Faf du Plessis, were part of the squad that received a 3-0 hammering from India four years ago. Not many are giving the Proteas a chance in the series, especially if the ball starts to turn.

India are gunning for a record-breaking 11th consecutive series at home.

You can also follow LIVE streaming of the match on CricketCountry (India vs South Africa 1st Test: Scorecard)

India’s playing XI was announced on the eve of the match.

With plenty of inexperience in their batting line-up, South Africa are fairly balance in the bowling department. There’s likely to be a tos up between Vernon Philander and Lungi Ngidi so that they can play two frontline spinners in Keshav Maharaj and Dane Piedt.

“I think the most amount of credit has to go to the team, because we, we lay down a vision in 2015, that, you know, we’re going to be flexible (with our combination). We were going to choose sides according to the conditions that we’re playing in. Because we want results, we want to be successful as a team, and we want to be at the top of the world. So if the team hadn’t bought into it, then it becomes a little difficult for guys who started don’t start to, you know, play with the kind of intent that you played with.” – Virat Kohli 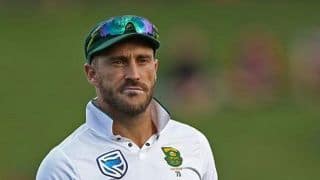