Klaasen, who is yet to make his Test debut, has featured in 14 ODIs and nine T20Is for South Africa.

Heinrich Klaasen has been called up as replacement for South Africa batsman Rudi Second in the Test squad for the three-match series against India that begins in October this year.

Second, one of new faces in the squad, injured himself while practicing with the South Africa A team and will require surgery.

“Klaasen is part of the one-day squad for the South Africa A tour and he will now be added to the squad in Second’s place for the four-day series that will assist his preparation for the Proteas Test series,” CSA Acting Director of Cricket Corrie van Zyl said.

Klaasen, who is yet to make his Test debut, has featured in 14 ODIs and nine T20Is for South Africa. He made his ODI and T20I debut in February 2018 and impressed during the home series against India. In 65 first-class matches, Klaasen has scored 3946 runs at an average of 45, which will be useful for South Africa s middle order.

Meanwhile, Second is a seasoned first-class campaigner and has featured in 105 games and has scored 6893 runs at an average of 45.05.

ALSO READ: ‘If we don’t beat India, it won’t be the end of the world’

South Africa start their tour on September 15 with the first of the three T20Is in Dharamsala. The Test series gets underway on October 2 in Visakhapatnam. CSA have also clarified the second Test which will now be played in Pune while the final Test will be held in Ranchi. Tom Curran out for the season 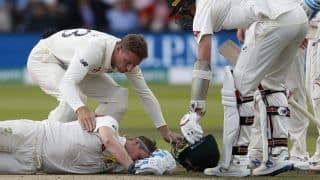