Lance Klusener, the South Africa assistant batting coach, is impressed with what he’s seen so far of India fast bowler Navdeep Saini. Saini made his international debut during the tour of West Indies and immediately made an impact picking up 3/17 in the first T20I at Lauderhill, where he constantly clocked near 150 kmph.

Saini, who has been a nets bowler for India since before the World Cup, has caught attention through his pace, and that is one of the many assets of the 23-year-old pacer which impresses the former South Africa allrounder.

ALSO READ: Have to work harder to get into Test team – Saini

“I am so glad to see Navdeep Saini being recognized. You don’t see many in Indian cricket who can bowl at 150 kmph. While he loves bowling at 150, he knows that this ability doesn’t last forever. So his idea is, just enjoy it as long as you can,” Klusener told TOI.

Klusener’s first impression of Saini dates back to last year when he was a consultant with the Delhi senior team for the Ranji Trophy 2018-19. It was during that stint where Klusener first noticed Saini and spotted the promise in him, saying Saini’s action is what makes things easier for him. Prior to the season, Saini was always drafted in the India Test team even though his turn never came.

“He is an absolutely great human being and that added a lot of value to our Delhi team last year,” Klusener said. “I think he has a wonderful action which is very clean and smooth. He is superbly fit as well. But while chatting with him, I realized he is hungry to bowl at 150 and above.” 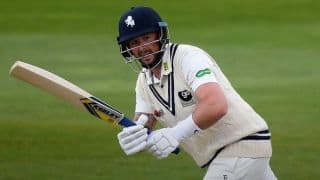