Touched by the gesture, Kohli, who recently became India's most successful captain in Test cricket, embraced him and also took a close look at the pictures on the fan s chest.

Virat Kohli draws a lot of attention from fans and has a huge fan following on social media. After Sachin Tendulkar and MS Dhoni, the Indian captain is undoubtedly the most followed cricketer in the sub-continent.

Such has been the craze from fans that some have even been successful at breaking through the security cover just to touch their super star, even on the field of play.

On Wednesday, after the last session of the first Test against South Africa was abandoned thanks to heavy rain in Visakhapatnam, Kohli met one of his fans who tattooed the captain s jersey number and achievements on his body.

Touched by the gesture, Kohli, who recently became India’s most successful captain in Test cricket, embraced him and also took a close look at the pictures on the fan s chest.

The shirtless fan Pintu Behra of also got all of Kohli s landmarks in his career including the 2008 Under-19 World Cup win, 2013 Arjuna Award and the 2017 Padma Shri.

Before the Test series, Kohli notched up scores of 79* and 9* during the Twenty20 International (T20I) series against South Africa. As a captain, he has the chance to lead India to a second consecutive Test series win in the World Test Championship. India bagged 120 points from their two-Test series against the West Indies. 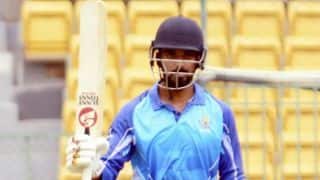 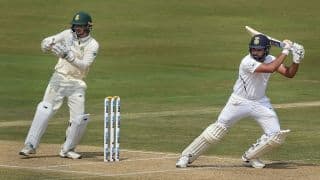