India vs South Africa, 3rd Test, Day 4: India Rout South Africa at Ranchi by an Innings And 202 Runs to Co

Concussion replacement Theunis de Bruyn top-scored for the visitors in what has been quite an abysmal performance by the former No.1 Test side It took India all of 12 balls on day four to finish off South Africa in the third Test at Ranchi, thus completing a 3-0 clean sweep on Tuesday.

South Africa started the day at 132/8, following on, trailing India by 203 runs, Concussion replacement Theunis de Bruyn top-scored for the visitors in what has been quite an abysmal performance by the former No.1 Test side. Credit to India as they have looked unbeatable in the series and more so in the third Test. de Bruyn was undone by one that kept low from Shahbaz Nadeem as he edge one behind for 30. Off the next ball, last man in Lungi Ngigi drove one with force that hit the non-striker Anrich Nortje’s arm and spooned towards Nadeem for an easy catch to signal the end of the series.

It started with a Rohit Sharma special up top after Virat Kohli won the toss for the third time in a row in the series. With the kind of form South Africa are in right now, the toss more or less decided their fate. Even still, Faf du Plessis had hoped for the batsmen to stand up, which was not the case. Later on that though.

Sharma ransacked 212 runs, becoming only the second Indian opener to score three centuries in a single series, after Sunil Gavaskar. Mayank Agarwal (10), Virat Kohli (12) and Cheteshwar Pujara (0) missed out as SA enjoyed a brief spell in control With Kagiso Rabad claiming two and Anrich Nortje bagging Virat Kohli for the second time in the series.

Test deputy Ajinkya Rahane did his reputation no harm with 115 while Ravindra Jadeja added a quickfire 54 before Umesh clobbered five sixes en route to a 10-ball 31 as India declared at 497/9.

In reply, South Africa’s top-order were under the pump and were sent packing by the sixth over. Quinton de Kock (4), Dean Elgar (0) and du Plessis (1) were back in the hut, Zubayr Hamza (62), Temba Bavuma (32) and George Linde added a few runs as South Africa were shot down for 162. India enforced the follow an and SA suffered further. 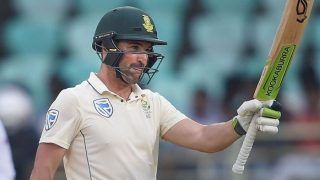 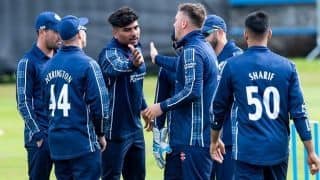