1 abandoned T20 International between India Women and South Africa Women, in 5 matches. India have won 3 of these matches and South Africa 1. Four of these 5 matches were played in this series, while the other was back in 2014-15, at M Chinnaswamy Stadium, Bengaluru.

2,586 days had passed since Rumeli Dhar had last played a T20 International, against West Indies Women at Ahmedabad in 2010-11.

2 bigger partnerships for South Africa for any wicket in Women s T20Is than the 103 added by Dane van Niekerk and Lizelle Lee: 170 between Shandre Fritz and Trisha Chetty, and 163* between the same pair of Lee and van Niekerk, both for the 1st wicket. Chetty and Mignon du Preez had also added 103 for the 3rd wicket.

3 partnerships against India for any wicket in Women s T20Is bigger than the 103 added by Dane van Niekerk and Lizelle Lee: 113* between Charlotte Edwards and Sarah Taylor for the 1st wicket, 112 between Meg Lanning and Alyssa Healy for the 1st wicket, and 104 between Taylor and Laura Marsh for the 2nd wicket.

6 fifties for van Niekerk, joint-most in South African history. Du Preez also has 6, while Lee has moved up to 5. 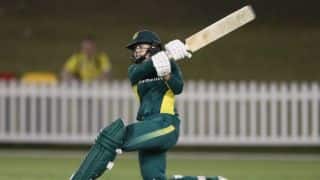