The India- Sri Lanka 3-ODI series will begin on Sunday at HPCA Stadium, Dharmasala. The match is set to witness change in guard. Thisara Perera, the new Sri Lankan limited-overs skipper hopes Angelo Mathews will do something special for the team. Mathews, who did not bowl in the Test series against India, is expected to bowl in the ODIs. “He is bowling in this series. He didn’t bowl in the Tests. He is prepared for ODIs and T20s. That gives us an option to balance the side. Hopefully he can do something special for us,” said Perera before the first ODI.

Virat Kohli has been rested for the limited over format against Sri Lanka, but Perera feels that his team will perform to their best ability.

“India don’t have Virat Kohli. He is their best batsman.

But we actually don’t think on those lines. We have to do our best. We will assess the wicket and if we play our best cricket, we can beat them,” he said.

Talking about the preparation of his team, Perera said:”We have prepared well. We had two good sessions over the last two days. We have a nice balance in the side. Hopefully we can do something special. Mentally and fitness wise we have done well.”

Asked about the players who are making a comeback to the team after recovering from injuries, Perera said: “We have a couple of players who have come from injury. It is a balanced side at the moment. We can assess what we want to do. I think (Asele) Gunaratne is back after injury and he is definitely playing. Hopefully we can do something special.”

We can beat any team

“He (Dhananjaya) has been ruled out. He is pretty close, but didn’t want to take the risk,” Gurusinha said.

During the last Test the Sri Lankan Sports Minister Dayasiri Jayasekera had stopped nine players from travelling to India as he was not informed about the team selection and was unhappy. Asked about the incident, Gurusinha said, “It is not a case of Minister not being happy with them. We had four days of holidays and the processes was missed (so they were not being cleared). Nothing else. Same team we selected. Nothing was changed. Small hiccup. It was due to four days of holidays.” 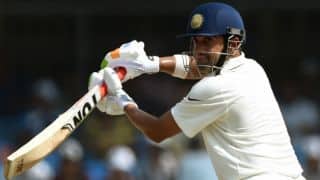