Statistical highlights of the ODI tri-series final between India and Sri Lanka at Port of Spain. Statistical highlights of the ODI tri-series final between India and Sri Lanka at Port of Spain.

# Dhoni became the first wicketkeeper to effect three stumpings in an innings on three occasions in ODIs.

# Dhoni has got his 19th Man of the Match award in ODIs — his sixth against Sri Lanka.

# Dhoni has become the second wicketkeeper after Kumar Sangakkara to record a 40-plus and effect four dismissals in the same match twice. He had first accomplished the double vs Hong Kong at Karachi on June 25, 2008 — 109 not out and four dismissals.

# Sangakkara (71) recorded his 77th fifty in ODIs. With 22 innings of fifty-plus — five hundreds + 17 fifties, he has set a record against India in ODIs, bettering the 21 (7 hundreds + 14 fifties) by Sanath Jayasuriya.

# Bhuvneshwar Kumar‘s tally of 10 wickets (ave.9.70) is his best performance in a series — also the highest in the just-concluded Tri series competition.

# Kumar has got his first Player of the Series award in ODIs. His performance of two for 24 is his best in a tournament final.

# Rangana Herath (4 for 20) recorded his career-best bowling figures in ODIs — his first four-wicket haul in an innings.

# India, with their nail-biting finish, registered their fourth victory in nine three-team tournaments against Sri Lanka in ODIs.

# India’s one-wicket win is their third by such a margin — their first two were against New Zealand at Auckland on January 11, 2003 and against West Indies at Cuttack on November 29, 2011.

# Mahela Jayawardene has become the third player to have appeared in 400 ODIs, joining Sachin Tendulkar (463) and Sanath Jayasuriya (445).

# Lahiru Thirimanne (46) recorded his highest score in ODIs in the West Indies.

# The 122-run partnership between Thirimanne and Sangakkara is Sri Lanka’s highest third-wicket stand in a Final vs India in ODIs.

# Jadeja’s bowling performance of 4 for 23 is his best vs Sri Lanka in ODIs apart from the best in a tournament final.

# Sharma’s fifty is his second in the Tournament finals.

With 217 runs at an average of 54.25, including two fifties, he is the leading run-getter for India in the recently concluded series.

# Dhoni’s superb unbeaten 45 off 52 balls is his highest innings outside the sub-continent in Tournament finals.

# Amongst the batsmen with 1000 runs or more in successful chases, Dhoni is the only one to have averaged 100-plus in ODIs. 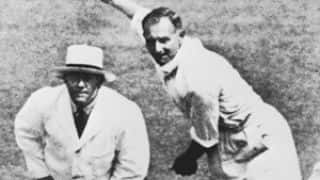 Hedley Verity’s 10 for 10: One of the finest spells of bowling in cricket history