Sri Lanka will tour India for five ODIs in November.

Sri Lanka Cricket (SLC) on Monday defended its decision to send the national team for a tour of India next month amid criticism coming from certain quarters, saying that it was taken at the best interest of the game. SLC said it was a collective decision of its executive committee to accept India’s invitation for a short tour.

After Kumar Sangakkara expressed doubts over the wisdom of the decision claiming that it had caused interruption to the fitness programme the team was undergoing, local media quoted an unnamed member of SLC executive committee questioning the sudden decision to undertake the tour. The blame was laid on SLC Secretary Nishantha Ranatunga for arbitrarily agreeing for the tour.

SLC said the initial invitation from India was to make the tour late October. “However due to the required preparation undertaken by the national team, it was agreed by both BCCI and SLC to begin the tour from? November 1,” an official said.  Sri Lanka agreed to play five ODIs in India after West Indies pulled out of their India tour owing to a pay dispute with their Board. 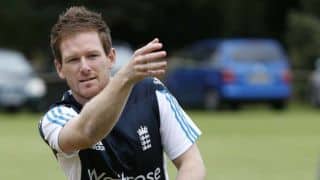 Kevin Pietersen is probably the best cricketer I have played with: Eoin Morgan