Bets worth Rs4,000 crore have been laid on the ICC World T20 final.

Massive betting is taking place on the outcome of the final ICC World T20 cricket match to be played at Dhaka on Sunday between India and Sri Lanka.

It is learnt that by Saturday evening bets worth Rs4,000 crore have been laid. That the match will be a cliffhanger is evident from the fact that the ‘bhav’ or odds prevailing late on Saturday evening was 80 paise for an India win and a close 86 paise for a Sri Lanka victory.

That translates into a gain of Re1.80 on every rupee bet on Mahendra Singh Dhoni‘s team and Re1.85 on each rupee bet on Lasith Malinga and his boys. In the afternoon, it was 75 paise for an India win and Re1.25 for a Sri Lanka win.

Despite the crackdown on the betting syndicates in Delhi, Mumbai and other places in connection with the Indian Premier League (IPL) match-fixing racket and the the Justice Mukul Mudgal committee unearthing evidence of betting and match-fixing, it is business as usual in the Mumbai metropolitan region.

Veterans in the trade, which is controlled majorly by the Dawood Ibrahim gang, are hyperactive on the eve of the crucial clash. Sadanand Date, JCP (crime), told DNA on Saturday: “We are keeping a close watch… we will act if we receive specific information about betting.”

Police sources say Anil Jaisinghania, who is holed up in Ulhasnagar, has emerged as the big-time bookie overseeing the multi-crore operations. He has a network of sub-bookies who operate out of several rooms spread across the labrynthine lanes of Ulhasnagar in Thane district. They use Android-based applications, Voice over Internet Protocol and other modern tools to accept bets through code language.

Jaisinghania operates in tandem with another bookie, Deepak Naraina. Their operational details have been passed on to the Thane police for necessary action, a senior Mumbai police officer said. The two have backup arrangements in Shirdi, Indore and Ahmedabad to receive bets.

Dawood’s brother, Anees Ibrahim, oversees the betting operations from Karachi, according to a former crime branch officer who is an expert on cricket betting.

In the last edition of the IPL matches, Dawood himself had talked to leading bookies like Chotani aka Doctor to instruct them on betting and spot-fixing, according to the Delhi police.

The Mumbai police, which arrested bookie Ramesh Vyas, too gathered considerable information that confirmed the role of the D Gang. But this time, Anees is the one doing all the talking by using satellite phones. The money is being transfered from Mumbai to Karachi through hawala conduits.

Sunil Abhichandani, who was till recently the alleged point man for the Dawood gang’s cricket betting purposes, it is learnt, has gone underground. He is based in Dubai. He applied for anticipatory bail, which was rejected; but he moved the high court, which ordered that the lookout notice for him should be recalled.

But he is still to appear before the Mumbai crime branch. “Unless we lay our hands on Sunil, it will not be possible to completely unearth the betting racket,” a crime branch officer said.

Since the police are closely monitoring all players in Dhaka, it is difficult for the betting mafia to go for spot-fixing. Nevertheless, efforts are on to influence the match outcome.

The services of a big-time builder and former ladies bar owner are being sought in this regard since he is known to have excellent contacts with some Sri Lankan players.

Betting is taking place on all aspects of the game, including who will win the toss, the number of runs likely to be scored and the number of wickets falling.

Interestingly, online betting too is taking place with sites like bet365.com, betfair, totesport, betonline, bet 770 and nordic bet accepting bets from India. One of the sites says that even though betting is illegal in India, there is nothing specifically against betting online. 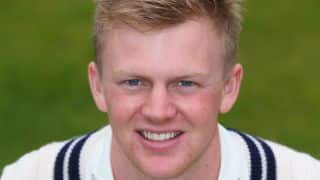